Your Two Cents: Women in the Royal Rumble Match 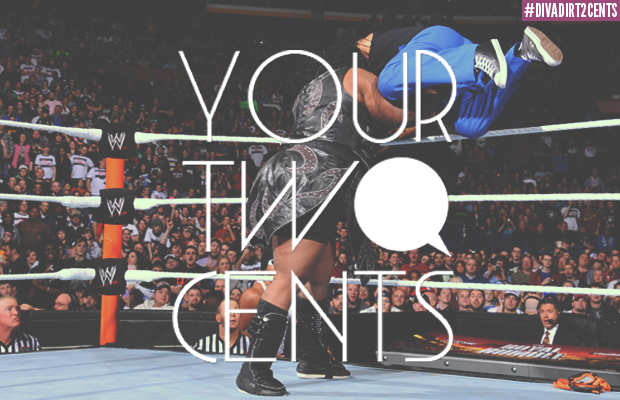 This week, we’re asking this: Pick one female wrestler, past or present, to book in this year’s Royal Rumble match. We’ve read your responses on our social media pages and picked some of the best submissions to highlight here on the website. As always, you can join the debate by leaving your comments!

• Ashley Matthew: Mickie James. It would be an awesome way for her to return to WWE if she ever got re-signed.

• @CatherineNikita: Has to be Tamina Snuka! Someone has to become the fourth Diva to enter the Royal Rumble. Right now, with her out, it’d be perfect spot to return!

• @ChadLLindquist: Noriyo Tateno. She was in the first Royal Rumble event!

• @David_Stepp: Becky Lynch could enter at #1 & Bexplex (the best exploder suplex in the biz) all 29 of them over the top rope.

• @IAmMikeKnight: I say Natalya. She’s #HartDungeonTough plus I think it’d be funny if she eliminates Tyson Kidd from the Rumble match.

• Jon Vega: Chyna would be an epic entry and I’m sure she still to this day would get a pop from the audience.

• Jordan Sheehan: Shaniqua! She would dominate!!

• @juansnow_: How about a petite Diva and not Divas with the stature of Beth Phoenix or Chyna? How about Paige?

?• Matthew Bemis: The one and only, Sable!!!! She’s my all time favorite and would love to see her in one last match!

• Matthew Brown: For past Diva I would chose Jazz because she was one bad ass and she could definitely rough out with the men. For current Diva I would choose Tamina. She’s big enough and tough enough to hang with the men and what a shocker and a way to make her return!

• Mauricio Cordova: AJ Lee has broken a lot of records in the past few years. So, it can be interesting to see her in the Royal Rumble match. I know that she’s not as strong as Chyna, Beth and Kharma are, but it would be awesome to see her.

• Nicholas Dombkowski: Jazz!! She would beat the crap out of all the guys!!

• Randi Parker: I think a surprise appearance from Beth Phoenix would be cool.

• Samuel C. Garner: Anyone who knows me knows this answer will be way too predictable, but I pick the #BOSS Sasha Banks.

• Steven Addison: Tamina would be a cool return/surprise. Also I think WWE should have kept Aloisia aka Lindsay Hayward. A 6’9″ Diva would be interesting to see in WWE.

Give us your two cents! Who would you book in the Royal Rumble match?