A Londoner’s Eye: Divas Division Has Fallen into a Post-Kharma Lull

Watching this past Monday’s 14-Diva tag match, something dawned me: The Divas division has almost regressed in the span of a few weeks. With Lay-Cool done and dusted and Kharma on the shelf, there’s no real glue holding the division together. Seeing all 14 Divas on the roster right now all together made me realize that we’ve fallen into a lull. 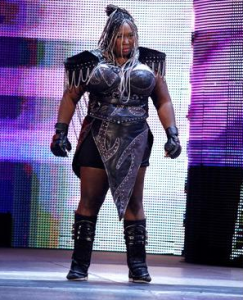 This is not a knock on any of the girls themselves, because I truly think given the right opportunity, every one of those girls can surprise the audience in some way, rather, the problem I have is with WWE not utilizing the girls as they should. The harsh reality that we’ve all come to terms with over the past few years is that the Divas will always be second fiddle and we shouldn’t expect miracles, but even with severe handicaps on the division (i.e. lengths of matches), the division has managed to succeed best the past 18 months or so when focused around certain Divas, for example Lay-Cool or Kharma. In quick succession, we lost Lay-Cool and we lost Kharma. Now, perhaps the writers had long-term plans to build the division around Kharma which they had to scrap through no fault of their own (or Kharma’s), so we must offer them that concession, but really, by now, they should have dusted themselves off and found a new direction to go in.

I’m not one of those people that is in the school of thought that girls like the Bellas or Kelly shouldn’t be used. That we should only concentrate on the ‘wrestlers’ like Beth, Natalya and Gail. Those girls are obviously extremely talented, but this is the WWE after all and that is the nature of the beast. And as I said, I think given the right opportunities, girls like the Bellas and Kelly can surprise the audience. Case in point: The twins’ promo on Kharma a few weeks ago. That was one of the rare moments where they got an opportunity to sell themselves to the audience and they took that opportunity and ran with it. The next week? Back to a short match with no real storyline. A similar thing happened with Eve Torres last year when she cut a great promo on The Miz and was then back to doing the usual Diva thing the following week. None of these small flashes of brilliance are built upon, and thus the Divas stay one-dimensional, with no real flair to their characters to tell them apart. WWE may tout its girls as ‘Smart, sexy and powerful’, but we all know which one the emphasis is on. (Hint: sadly, it’s not smart and it’s not powerful.)

WWE put the Bellas in that segment with Kharma for a reason: To give them a rub from the outgoing star. They did a good job that night in utilizing the twins but the following week, aside from a passing mention on commentary, there was no real follow-up. That segment should’ve been a catalyst to continue to develop the Bellas the following week, and the week after, and the week after that. Put them in backstage segments, have them mock other Divas — or have other girls stand up for Kharma. Build their characters as with Lay-Cool and Kharma. Instead, it looks like we’ve gone back to the meaningless multi-Diva matches.

The 14-Diva tag match (complete with chorus line!) on Monday was symbolic to me — symbolic of the silly matches we saw on a near-weekly basis before the likes of Lay-Cool began to gain steam. Multi-Diva matches with no real bearing week-to-week on storyline, silly matches like the Diva Bowl and so forth. Of course, matches like this haven’t gone away all together but I feel like I’ve seen more focus on storylines and feuds in the past 18 months in addition to the silly stuff.

With Kharma, WWE proved that they can give Divas a spotlight. They promoted her all over the place, made her seem like a star attraction and thus the fans responded. The episode of Raw where she announced her pregnancy, that announcement was teased throughout the two hours — something we rarely see for a Divas segment. So we know that the writers can, in fact, write something more substantial for the Divas on a weekly basis, but as soon as Kharma was gone, so was that creativity. Kharma wouldn’t have worked if they put the same effort (rather, lack of effort) they put into the other Divas. She worked partly because she is indeed an attraction, but also because WWE put more effort into her character.

So, here we are on Monday. Seeing those 14 Divas in the ring together, it felt like something was lacking. There was no real star power in the ring. We had 14 girls that look great, but where’s the Kharma-like figure? Where are the Lay-Cool-like figures? Kelly and the Bellas have received pushes of late, but even their feud has been nonsensical — one week it’s on, the next week it goes no where. Beth Phoenix was an attraction in the division, but has barely been seen on TV in the past couple of months and frankly, has been mishandled since her return from injury last November. Natalya, who was riding high at the top of the division going into 2011, is now a ‘coach’ on SmackDown. In fact, there’s probably something along the those lines that you could say about every Diva in that match. Again, this is not a knock on any of the girls; it’s through no fault of their own. But seeing all of our current Divas in the ring this past week, they all sort of got muddled together. No one stood out as a clear star in the division. Sure, the division has its problems, but I would say, we knew, as fans, where we stood. We knew that Lay-Cool were the top heels, or that Kharma was the big monster Diva. We knew. Right now, I don’t know that the Bellas are the top heels. (Okay, they have the belts but that doesn’t define your character.) I don’t know that Kelly is the top babyface. I don’t know what makes them stand out from their peers because they aren’t given the chance to. 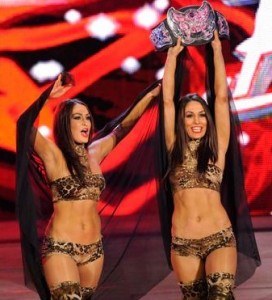 What can WWE do to get the division on track? As I said, I think the division works best when centered around one girl or a duo. Fans may cry that they’re overexposed, but story wise, concentrating on one character or two characters has proven to work. Focus the division around the Bellas, they are your champions after all and have them do more. Give them a challenger who they can torment. Give them promos to build up their characters. Give them backstage segments interacting with the guys. Hey, if even a likable male wrestler is shown to dislike the Bellas in a backstage segment, that tells the audience something — even the guys don’t like these girls, they must be bad. Taking the storylines out of the confines of just the Divas division and giving them wider context in the show, i.e. the male wrestlers rooting for a certain girl, disliking a certain girl, could help make the audience care more too.

The division has its issues and those will probably always be there (three minute matches etc.), but there are things that WWE can do. Picking a star or two to succeed Kharma should be the first step.