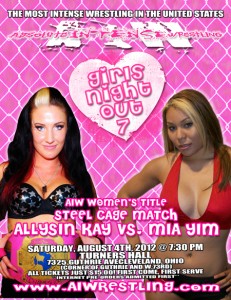 Tonight, AIW is holding their seventh “Girls Night Out” show.

The show will be headlined by Allysin Kay defending her AIW Women’s Championship against Mia Yim in a Steel Cage match.

This grudge match stems from an event at Girls Night Out 5 in January 2012, where Yim broke Kay’s nose in three places with a kick.

The two wrestled once more at Girls Night Out 6, in a “Fans Bring the Weapons” Match for the then-vacant AIW Women’s Championship, which Kay won.

Also on the card is a singles match between Sara Del Rey and Hailey Hatred.

Results from the show are coming to you thanks to @DaveMuscarella on Twitter.

* Trash Cassidy vs. ThunderKitty is up next. This match was requested by the fans. Cassidy’s use of a chair backfired when ThunderKitty kicked it into her face to get the win.

* Pondo Rules Match: “Crazy” Mary Dobson vs. Lil Naughty. Dobson wins after use of thumbtacks. “The Social Network” attack Mary post-match. They declare that they are here to take over AIW’s women’s division.

* Veda Scott vs. Courtney Rush is the first match back after clean-up. Veda Scott is accompanied by Greg Iron. Scott eventually wins with a lot of assist from Iron.

* A pink steel cage is being set up for the Allysin Kay vs. Mia Yim Steel Cage Match.

* AIW Women’s Championship/Steel Cage Match: Allysin Kay (c) retains the title after a submission on top of the cage. Kay and Yim receive a standing ovation for their efforts.