AJ on Miss Elizabeth Comparisons: “I Have a Long Way to Go” 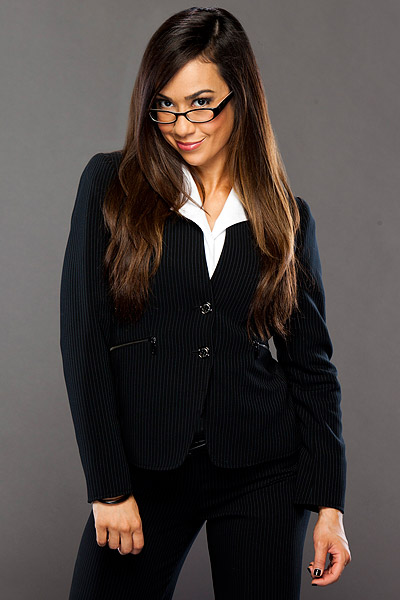 WWE Diva and Raw General Manager, AJ Lee, has weighed in comparisons made between her and the iconic Miss Elizabeth.

Elizabeth, who captivated audiences in the corner of Macho Man Randy Savage, found herself involved in a long running storyline similar to AJ’s recent turn with CM Punk and Daniel Bryan.

Speaking on the comparisons to ESPN, AJ said:

Oh my gosh, I’ve been a fan my whole life. Miss Elizabeth was my first idol growing up, and I was just obsessed with it. I was a huge fan of Molly and Lita and Stephanie. I was just watching for so long, and at 12 years old, I just decided this was something that I wanted to do. I started at 18, and it’s been a really long journey, but it just all feels like a dream to be here now.

I think I have a long way to go. She is out of my league, but I appreciate the comparison. I think it’s the innocence people see in the two of us, and having something that’s more of an understatement. A woman who appears to be more of a gentle creature on TV. It’s amazing to me to be compared at all to her, or anyone in the past. I hope I can be someone people look at in the future and compare other people to me. It’s a big deal, and I appreciate it.

I think the important thing is that I’ve never tried to be someone I’m not. People can read right through that. There’s a place for people who are unattainable where you want to have their poster on your wall because they’re larger than life, and that’s fine, but that’s not me. I’m not the coolest person in the world. I’m not the sexiest Diva or the strongest Diva. I know who I am. I’m not the most popular person and I’m kind of dorky and I’m someone you can see at your school or as your neighbor, and I think people like that. I think I’m a girl that represents someone you might know or would like to hang out with, and I think people just relate to me. I also look like I’m about 14, [laughs] so maybe I look like I do go to high school with everyone. I just think it’s cool that people have taken to me. Before I was on the show, I was a fan, and I think people can see that.

Discussing her shooting to fame this past summer, AJ says:

It’s strange. The other day I was in Walgreens just trying to buy a toothbrush, and I’m not aware — I don’t read the Internet, I just watch the shows back to see how I did — so I’m not really aware how many fans are out there watching this. So here I am at Walgreens buying a toothbrush, and this guy who works there is helping me for like 10 minutes, then all of a sudden he blurts out: “You shouldn’t let Daniel Bryan talk to you like that!” and runs away. I was like, “What?” I was so confused. [laughs] It’s so weird because people know you even if you don’t know them, and I’m still wrapping my head around that. It’s really cool, but it’s a little overwhelming for me because I’m a shy person. I had someone come up to me at the airport and grab my engagement ring after Daniel Bryan proposed to me, and she was like, “Oh my god, this is amazing. You and Daniel are going to be so happy.” It’s weird. Everyone feels like they know you. It’s an adjustment.

The Raw GM discusses more in the interview, including video games, and possibly being included in WWE ’13. You can read the full piece here.