Alicia Fox Back on the Road, NXT Rookie Diva Also Touring with SmackDown 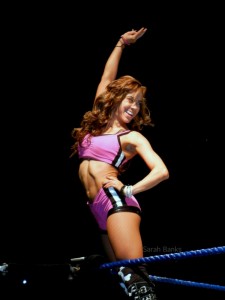 Despite suffering an apparent shoulder injury a couple of weeks ago, Alicia Fox was back on the road this past weekend.

Alicia teamed up with Rosa Mendes to take on the team of Natalya and NXT Rookie Diva, AJ.

You can see a picture of AJ spotted at Saturday’s live event to your left.

Thoughts: With Layla possibly injured, it would make sense for WWE to bring up AJ to add more depth to the SmackDown roster. I would hope Naomi isn’t far behind, as she was — along with AJ — the immediate standout on NXT season three. Of course, AJ has worked Raw and SmackDown house shows before with no call up so we’ll see what happens. Also, good to hear that Alicia’s injury isn’t as severe as first thought since she’s already back in action.