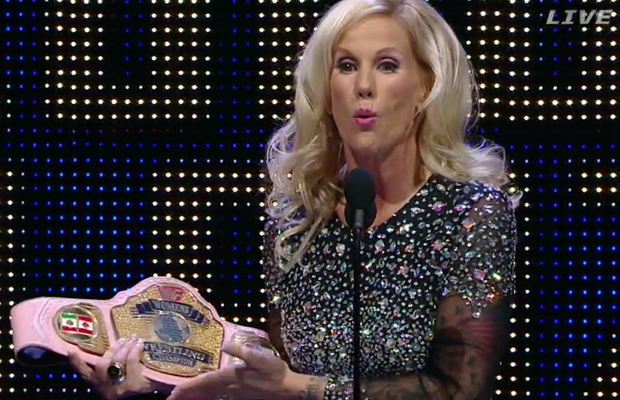 Alundra Blayze is now officially a member of the WWE Hall of Fame.

In her speech, Alundra referenced her early dreams of being a Hollywood stuntwoman and her introduction to wrestling, thanking fellow WWE Hall of Famer The Fabulous Moolah for paving the way.

She credited her time wrestling for All Japan Women’s Pro-Wrestling with shaping her “beliefs, morals, values and style.”

Addressing what she called “the elephant in the room”, Alundra said she “unknowingly fired the first shot” in the Monday Night War and trashed the Women’s Championship for “job security.” Anyone in her position, she says, would have done the same.

She thanked numerous influences and friends in the wrestling business, including Evan Karagias, who she said was “the only man with the stones” to let her pin him for the Cruiserweight Title in WCW.

Near the end of the speech, Natalya reappeared to bring out a trash can, from which Alundra pulled out a number of props representing things she disliked about pro wrestling, namely bra and panties matches and wrestling in BBQ sauce.

Lastly, she pulled out the classic Women’s Title belt, saying that it’s a “real wrestling belt” that is now “back home.”

Closing out her speech, she boldly proclaimed, “This Diva will never be subdued!”

Watch Alundra react to her induction in the video below:

You can watch the speech in full on the WWE Network.

What did you think of Alundra’s speech?