Amy Lee: Luna Vachon Should be in WWE Hall of Fame 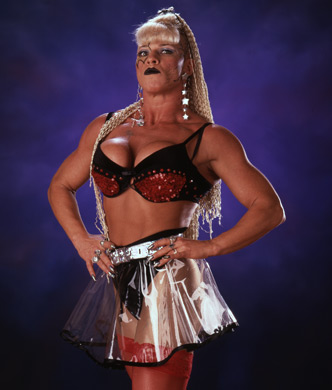 Independent veteran Amy Lee isn’t one to mince her words, and mince she didn’t as she blasted WWE for not recognizing her former mentor Luna Vachon with an induction into its Hall of Fame following the announcement that Trish Stratus will be the latest addition to its Diva wing.

The controversial WSU star made the comments in an interview with Kayfabe Wrestling Radio amidst a foul-mouthed diatribe against WSU wrestler-turned-WWE Diva AJ Lee (not suitable for print!), batting for the late wrestler’s inclusion in the Hall of Fame.

Amy, who posthumously inducted Luna into the WSU Hall of Fame following her tragic death in August 2010, said: “What angers me is, here is Luna — you had her aunt, you had her stepfather, you had her uncle… they were in the business. She was trained by [Fabulous] Moolah, who is in your Hall of Fame. You don’t put Luna Vachon there? God forbid you have her uncles accept on her behalf or her sons?”

“Oh, wait. That’s right. Back in 2000, you told her she was a great wrestler but not pretty enough for TV when you fired her.”

Despite her grievances with Luna’s lack of induction, the notoriously hard to please wrestler did praise Trish, who will be inducted into the Hall of Fame on April 6th.

She said: “Trish did good for herself. She went from a fitness model to a wrestler and she did a very nice job. I’m not knocking that.”

Listen to the clip below: