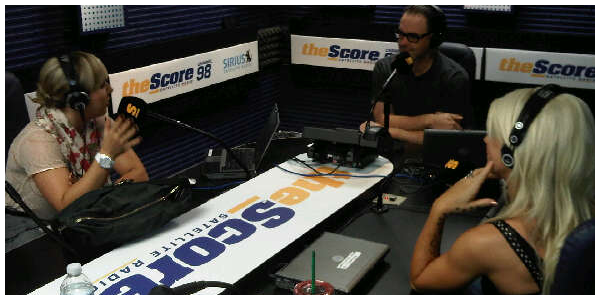 TNA Knockouts Angelina Love and Taylor Wilde joined The Fight Show With Mauro Ranallo, discussing an array of topics including the wrestlers that inspire them, Angelina’s visa issues from last year, the origins of The Beautful People, and the people currently in charge of running the Knockouts division. Highlights include:

• Trish Stratus was a huge influence on both of them, especially since they’re both from Southern Ontario.

• Angelina has always wanted to be a wrestler, since the days of Macho Man Randy Savage and his flying elbows off the top rope.

• Taylor is naturally hyper, so the transition into wrestling was a given for her. The Fabulous Moolah was a big influence on her.

• Other female wrestlers are motivation for them, as they all look like models.

• Angelina’s favorite memory from TNA is the first cage match she did.

• Taylor’s favorite memory was getting in the ring with Awesome Kong for the first time, as well as the $25000 challenge.

• They started off as babyfaces…the clean, blonde girl look, but it was challenging for Angelina as it conflicts with her personality. Taylor, on the other hand, is a more natural heel.

• Angelina loves to cut promos, and it is showing in her work.

• D-Lo Brown and Al Snow are handling the Knockouts side of TNA.

• Angelina is a “perfectionist in a business where you can’t be perfect.”

• The Beautiful People reunion was the highest rated segment on Impact.

• Taylor’s favorite opponent was Angelina and Awesome Kong, Angelina’s was Taylor and Roxy.

• Angelina’s visa issues were blown out of proportion.

The Fight Show airs weekdays at 2pm ET on The Score, SIRIUS channel 98.