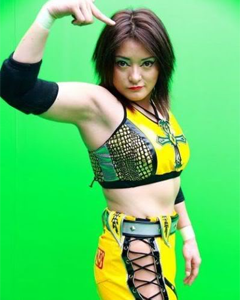 SHIMMER Women Athletes announced the addition of Ayako Hamada to their DVD tapings taking place in Berwyn, IL on October 1st and 2nd.

Check out the press release below:

[notice] This week, SHIMMER – WOMEN ATHLETES is proud to announce the addition of AYAKO HAMADA to its next set of DVD tapings, just over five weeks away!

Ayako has been an integral part of the SHIMMER events since late 2009, participating in some of the most memorable and action packed bouts in company history. Hamada will be a part of all four DVD releases taped on October 1st & 2nd!

Front row seating is already SOLD OUT for both days. General admission seating to the October 1st & 2nd tapings can be purchased at http://shimmerwrestling. blogspot.com/p/events.html using PayPal. General admission is $30 per full day of taping (essentially $15 per DVD worth of live matches). You can also purchase tickets by mail, using money order. For mail order instructions, E-mail [email protected] We will also have tickets available during intermission of this Saturday’s (8/20) AAW event at the Eagles Club for those who would like to pick them up in person.

Over half of the tickets for these events have already been sold. Since seating at the Eagles Club is very limited, we do suggest securing your tickets in advance if you wish to attend.

In addition to the SHIMMER events that Saturday & Sunday, our friends at AAW will present a card at the Berwyn Eagles Club on that Friday evening, September 30th. A six woman tag team match featuring SHIMMER talent will be on the AAW event, as MsChif & Jessie McKay & Nevaeh will face Madison Eagles & Mena Libra & Sassy Stephie. Visit http://www.aawrestling.com/ to pick up tickets to the September 30th AAW event, to make it three straight days of live wrestling at the Eagles Club!

SHIMMER is back October 1st & 2nd in Berwyn!