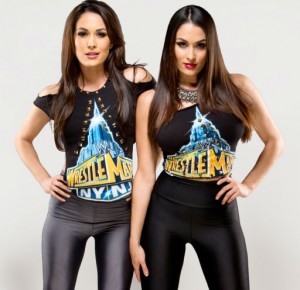 The Bella Twins, Brie and Nikki, have addressed the eight-person tag team match — which was due to feature them teaming with Cody Rhodes and Damien Sandow against Brodus Clay, Tensai, Cameron and Naomi — being cut from last night’s WrestleMania 29 broadcast.

“Keep your head up. Success doesn’t come from giving up and quitting….”

“…..its comes from dreaming and believing that you can get through anything if you set your mind to it.”

Nothing confirmed yet, but it’s likely the match will end up taking place on tonight’s episode of Raw.