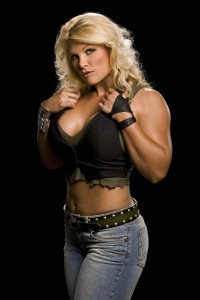 The Rochester Metromix has an article about Beth Phoenix in regards to a Raw house show held in western New York a few days ago — a homecoming for the WWE Diva.

Beth talks about being proud to represent western New York in WWE:

There’s something about western New York that seems to breed fame. Taye Diggs, Abby Wambach, Philip Seymour Hoffman, Kristen Wiig, Chad Michael Murray, Renée Fleming and Teddy Geiger have all called this area home — along with a host of intellectuals, politicians and businessmen.

So it should come as no surprise that the WWE Raw show at Blue Cross Arena on Saturday, June 11, will be a homecoming of sorts for Superstar Diva Beth Phoenix.

“Whenever people asked me what I wanted to be when I grew up, I said ‘pro wrestler,’ even as a little girl,” says Phoenix, 30.” She was the first female varsity wrestler in the history of Elmira’s Notre Dame High School, winning championships at the local and state levels. Before pursuing a professional wrestling career, Phoenix moved to Buffalo and majored in criminal justice at Canisius College while continuing her wrestling training at a small gym 28 miles away in Medina, Orleans County.

“It was tough not having any connections in the field,” she says. “I had to work my way from the ground up and keep banging on doors to get noticed.”

Beth also discusses the WWE Divas and the competition amongst them:

“Our moniker is ‘smart, sexy and powerful,’ but our first goal is being great role models for men and women alike. Looking great might initially draw them, but we are educated, have drive, college degrees and talent beyond ways in the ring,” she says. “You can’t get away with being mediocre if you want to be a WWE Superstar Diva.”

And while the Divas are united on their WWE identity, it’s every woman for herself on the road. Because they are often pitted against one another during performances, Phoenix admits that much of the tension carries off-stage as well.

“Divas have huge competition,” she says. “Friends are few and far between. In the locker room, you can shake hands or maybe have dinner, but in the ring it’s our livelihood and paycheck. I want to be the best.”