Brie Bella on Which Twin is the Better Wrestler, What if Nikki Had Won Divas Title Before Her 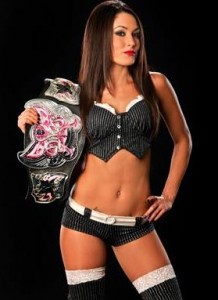 Former Divas Champion, Brie Bella, gave an in-character interview to Pro Wrestling Illustrated about her Divas Championship while still holding the belt. Brie has obviously since lost the belt to Kelly Kelly.

In the interview, Brie plays up her heel character, deflecting questions and threatening to cut the interview short due to questions about her sister, Nikki, saying the interviewers were trying to stir up trouble between the two.

When asked if it was weird to be doing an interview without Nikki, Brie responded: “No, it doesn’t feel strange at all. We have lives that are separate from each other, both personally and professionally. It’s not like I need Nikki by my side 24 hours a day, 7 days a week.”

“Why would it feel strange for the WWE Divas Champion to do her own interview?” she continues. “To me, it would be weirder if you had asked to talk to Nikki, too. Honestly, if you had asked us both, I would have said no.”

When asked if Nikki was a better solo wrestler than her, Brie said: “Ugh, another Nikki question. Look, I’ve got the title, and that says it all. Whoever holds the Divas Championship is the top woman in this business.”

Brie is then asked how she’d feel if Nikki had won the belt before her. She says: “The reality is that you are talking to me right now, and not Nikki, because I am the champion. If she someday wins the belt — and I think she eventually can — she’ll have the chance to honestly say that she’s the best in the world.”

The interview can be found in the September 2011 issue of PWI.

Thoughts: The whole interview was in character which is cheesy, in my opinion, in this day and age. I would legitimately like to hear the Bellas’ opinion on who they feel is the better worker. Perhaps one day.