Brooke Tessmacher Found Tara “Scary” When She Was Younger, Now She’s “Like Blood” 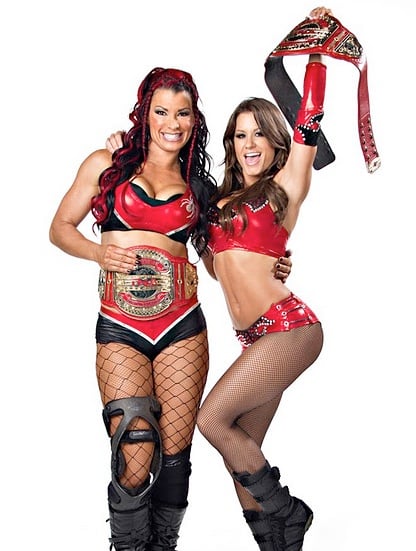 Impact Wrestling star Brooke Tessmacher has revealed that she once found tag team partner, Tara, “scary” — but now thinks of her as family!

The bombshell Knockout, who celebrates her birthday today, says that she was intimidated by veteran Tara — previously Victoria in WWE — when she used to watch her on TV as a youngster.

Brooke told us exclusively on DD360 earlier this week: “I remember sitting and watching her, thinking, ‘Oh my gosh, she’s so scary’ when I was younger. Because she’d come out to, ‘I ain’t the lady to mess with’ [Tara’s entrance music in WWE] on TV and she had this whole aura.”

“Even when I went to the WWE, she was so scary to me and she ended up being the nicest one backstage. I mean, the most loving, nicest, funniest, goofiest girl.”

Since teaming up as TNT earlier this year, Brooke and Tara have gone on to become the Knockouts Tag Team Champions.

Brooke looks back on watching Tara on TV as a fan, to now being her partner in the ring. She says: “The fact that I used to watch her and I was a fan of hers before I got into the industry, and now I’m her partner, it’s something that I can never explain. I can’t explain the feeling. I try to tell her all the time.”

And Tessmacher says that the friendship isn’t just for show, she and Tara — real name Lisa Marie Varon — are legitimately as close as they seem on Spike TV’s Impact Wrestling.

She says: “What’s nuts now is we’re like sisters. We have this crazy bond with one another, because we’re both over the top, goofy, just say whatever with no filter and do whatever. We’re the goofballs. We’re the pranksters. And we do it more so back and forth to each other because we just get a kick out of it.”

“To work with such a legend is above and beyond anything I ever expected. Ever. She’s like blood to me and she always will be.”

Listen to the full interview with Brooke by catching a replay of this week’s DD360 at this link.