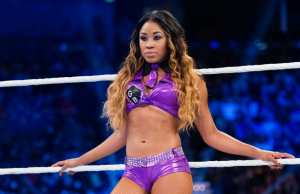 In a TwitLonger post, former WWE Superstar Cameron, real name Ariane Andrew, comments on her recent release from the company. The post goes as follows:

THANK YOU. Thank you to all the employees behind the scenes who work hard to provide us with everything we need. Thank you to all the trainers and coaches at the performance center and at NXT who worked with an inexperienced girl like me and taught me so much. Thank you to Mr. McMahon and his family for giving me an opportunity to live out a dream and experience some of the most incredible things. Thank you to all the superstars and divas that have become my family. I have made some lifelong friends and have met some incredible performers who are truly amazing people. And last, but certainly not least THANK YOU to each and every member of the WWE Universe that has shown me love and supported me during my tenure with the WWE. To all the fans that use to tweet me, email me, send me mail and wait in lines to see me I thank you from the bottom of my heart. Without the WWE Universe we are nothing and for that I am truly appreciative. And of course there is also the internet wrestling community, my beloved IWC. I thank you all as well. I may not always agree with you or your methods of expression but I do respect your opinion and I do thank you for pointing out all the things I needed to improve upon. The passion you display and the criticism I received from you almost daily is what fueled me to push harder to learn this business and hone my craft so that one day I could come back and even make you all proud. I wanted to take this one last opportunity to not only thank everyone but to share some of my feelings and thoughts as I ride off into the sunset.

From being casted on Tough Enough, to being signed to FCW, to getting called up to the main roster and then deciding to go back to NXT, these past few years have been one hell of a roller coaster ride for me. Despite the outcome, I consider myself beyond blessed. Of course all good things must come to an end and not every story has a fairytale ending. Friday was a bittersweet day for me as I received my release. As I think back on all the memories I am filled with a cluster of various emotions; sadness, frustration, happiness, and everything in between. I wanted to make an impact in the WWE not only as a confident and successful African American female but as a role model for young females and underdogs around the world. I wanted to show them that it is possible to prevail against the odds when people think you are undeserving, not good enough or simply don’t fit the mold. We all know that I had no wrestling experience prior to WWE nor had I grown up a diehard wrestling fan. Clearly that was evident when I was eliminated from Tough Enough but since that day I worked extremely hard to learn not only the business and its history but how to compete in the ring. I spent very little time in FCW before I was called up to the main roster. Although, that was an amazing opportunity in hindsight it may have caused me to miss out on some valuable training time that may have eventually led to where we are today.

After sitting on the sidelines as a spectator for some time I had asked to be taken off the road until the writing team could come up with something for me to do. In the meantime I took it upon myself to hire Carlo Cannon, a phenomenal wrestling talent and good friend, to teach me new moves and work on my in ring skills and techniques. I was hoping to get some of that training that I missed out on when I first broke into the business. I also invested in acting and speech classes to help me with my reactions and promos. Meanwhile, I constantly sent emails to the agents and writers pitching several ideas in hopes of getting a chance to show what I have learned and done during my time away. I had proposed being a manager/valet for a superstar, hosting a comical gossip segment, covering diva and superstar interviews and even a couple storylines for possible gimmicks unfortunately none of them came to fruition. I’m not even entirely sure my ideas were seen or considered but I left no stone unturned. I knew that taking some time off from TV could possibly lead to my release, but I’m relentless, driven, and extremely passionate so I did not want to just sit around and collect a check. I wanted to be a contributor and a valuable asset to the company.

After some time passed, I spoke with WWE and we decided that I embark on a journey down at NXT. I was desperate to get back in some capacity so I agreed because I felt a fresh new start could ultimately benefit me in the long run. I had one goal in mind and that was to show everyone that I could do this and get back to TV. While I was down there I was getting positive feedback from my peers and the trainers who agreed that I was showing a lot of improvement. I felt more comfortable in the ring and I was always confident in my ability on the microphone so I kept on pushing because I felt I was headed in the right direction. I kept in constant contact with agents on the main roster hoping I could get back into the thick of things. Days turned to weeks and weeks turned to months but nothing seemed to change. Every time I spoke to someone I was told things would change it’s just a matter of time. At the time I believed it so I kept my head down and kept working but since I noticed no change I decided to take matters into my own hands.

WWE is all about opportunity. Some get opportunities while others may not. The WWE Universe only gets to see and experience what the WWE allows them to. I see it all the time. I am sure you can think of a superstar or diva that the WWE Universe loves and backs blindly but that superstar or diva does not get to the top because he or she may not receive the opportunities to shine. I’m sure you can also think of a superstar or diva that the WWE Universe does not believe in yet he or she is everywhere and provided all opportunities to succeed. It is the nature of the business, there is so much talent but so few opportunities to go around. Sometimes you have to go out there and grab everyone’s attention on your own. Sometimes you just have to reach up and “grab the brass ring” like Mr. McMahon so famously once stated. The day before my release I posted a lengthy statement about the IWC regarding their views and the ways they choose to express their opinions. The statement quickly spread like wildfire, (mainly due to my closing line, which btw was meant to be a sarcastic jab) generating thousands of comments on wrestling sites and was even posted on forbes.com among other outlets. My inbox was quickly flooded with emails, messages and interview requests. My goal was to provoke the fans and parlay that into perhaps a top flight heel gimmick, the former seemed to have worked. I may not come from a wrestling family and I may not possess the raw talent and athleticism that some of the current divas do but what I do have is the charisma and the attitude that can evoke raw emotion from an audience. I may not be your ideal blonde haired, blue eyed American sweetheart but I am a confident and educated (with two degrees) African American bad a** b*tch, which this company has lacked for a long time. As I looked at the female talent on the roster I felt that a full out heel persona was missing, someone like Stephanie McMahon or Vicki Guerrero who the fans love to hate but ultimately respect. Someone that the fans pay to see get beat, someone they pay to come boo and genuinely dislike. I wanted to be that kind of character. Since I was not getting the chance to display that in the ring or on a mic I decided to use the internet and the fans to show the WWE what I could do. I truly feel that if I was given a chance to do promos and play up this heel persona I could have generated tremendous interest and heat. I could have finally showed what I had learned in the ring during my time away and I could have contributed to this tremendous divas revolution. Unfortunately, before that could happen I was given notice of my release.

So today I turn the page and embark on a new journey. When I began to realize that my time in WWE was winding down I invested in myself and other projects outside of professional wrestling. I can say that I am in a good place both mentally and financially. Although it is sad that I no longer will be with the WWE I am proud of my hard work and I am happy knowing that I did everything I could from my end. Where I go from here and what I do is still a work in progress but I can promise you that this will not be the last that you hear of Ariane Andrew. Whether I continue my pro wrestling career or build on my other projects I will always give it my all and I will also lean on your love and support. I won’t say goodbye…I’ll simply say thank you and I will see you again soon