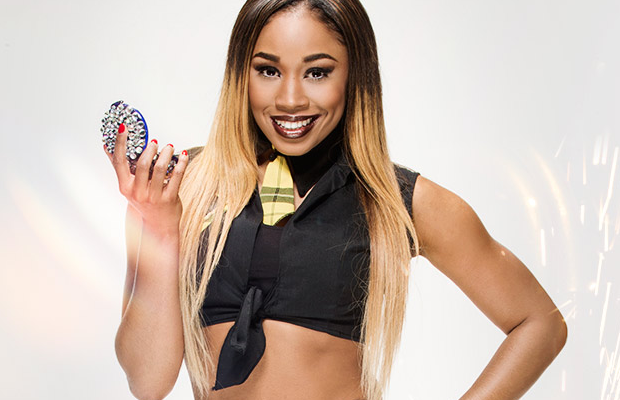 How she came about being cast for Tough Enough:

“I actually originally was a part of a Diva Search, that’s how it originally happened. Out here [in California] actually and I had submitted myself through L.A Casting. I had went in and I was really honest. I wasn’t an avid wrestling fan. There’s no point to lie. From there, they were like, ’We want you to do Tough Enough’, so that’s how that kind of happened. I was excited, I was ready to take it on and I knew I didn’t have the experience but, for me, I’m very competitive and I was like ‘Let’s do this.’”

On her decision of leaving the main roster to return to NXT:

“I went back down to NXT and that was an interesting situation. I felt like I was doing things. I was improving my craft but still felt like I was getting the short end of the stick. I feel like I can walk away saying I know I did everything. I was pitching stories, from gossip to being a valet and I was getting frustrated too as well because I know there’s something here for me but I’ll be patient and wait.”

How she was told she was going to be released, after reading rumors of upcoming releases online:

“I see a text from Mark Carrano and he was like ‘Can you please call me?’. I knew right then and there, I knew it. I picked up the phone, I call him and he’s like ‘Hey, we’re going to release you from your contract.’

On being part of three seasons of Total Divas:

“It was actually a lot of fun but I’m going to be honest, I feel like, for me, people only got to see 2% of who Ariane is. So that was the unfortunate thing. It was definitely a fun experience. You know, I was super excited originally about it because I was like, I get so much hate and people just think Cameron. I thought this was going to be a nice time for people to see who Ariane is.”

On finding success after WWE:

“I am such a driven person. To me, ’no’ or saying ‘I can’t’ do something just makes me push even harder. So I definitely know that the next chapter will be successful and I’ll just keep adding on to the chapters of my book.”

You can hear the full interview at www.podcastone.com.

What are your favorite Cameron moments?