Can SmackDown Give the Women’s Division Its Respect Back? 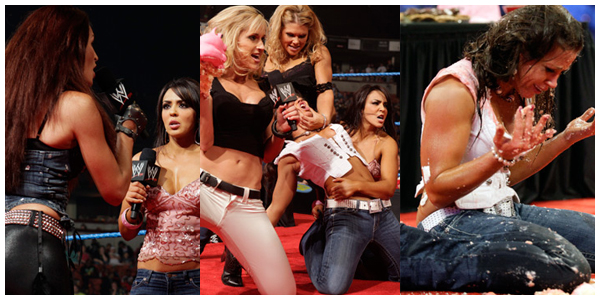 In the past few years many people have [wrongly] assumed that the lackluster women’s division in WWE is due to the Divas themselves. With no Trish Stratus or Lita leading the pack, the division has admittedly waned but I would argue, it’s not because of the women in it. It’s because of the writing. In a post-Trish era, it all went downhill. Not to toot her horn too much, but it’s true — Trish was seemingly the only Diva that WWE had full confidence in carrying a real storyline, developing it for several months, engaging the viewer and delivering that great blow-off match that we all anticipate. When she left, the effort stopped.

It’s not that any one of the girls can’t do the same, they just haven’t been given the opportunity to. Storylines that once spanned months now span weeks, matches on Raw — once home of the coveted Women’s Championship — are now usually half as long and half as exciting. The audience itself, paying customers, have stopped lapping up the Divas action and instead feel something apathy and indifference. You may have your own arguments as to why Diva A or Diva B aren’t over but my argument is this: the audience, you know the ones that pay for the honour, don’t care because WWE has given them little reason to care over the years. Any one of those girls could be over if WWE gave them the attention to detail in character that they gave Trish, the same effort in storylining that they gave Trish and had a little confidence in the girls to do their own thing, like they did Trish.

While many have switched over to TNA or perhaps SHIMMER, it’s been a long road but hope isn’t lost. WWE does know how to do women’s wrestling because they’ve done it before and it seems, they may be looking to do it again. Last week’s segment on Friday Night SmackDown was easily the best thing the Divas have done in quite some time — the closest thing to the original ‘golden era’ of Divas that is so treasured.

This segment to me is the biggest milestone for the Divas division in years. It showed that the “smart, powerful and sexy” tagline isn’t just a load of BS. It showed a confidence in the Divas that has been less than visible of the years. And it showed that the girls can tell great stories too.

So what made it work? First of all, the elaborate setup of a segment like this hasn’t been seen in the women’s division perhaps since the ‘Ashley-in-a-box’ incident. The use of the red carpet, props and platter of food instantly meant that some effort had been put into this angle. Now it may not mean a lot on the surface, but for the Divas who are usually just thrown out there in a match to fill a proverbial quota, it’s significant when WWE pulls out the stops. Secondly, there’s the issue of timing — something it seems that both of the main companies get wrong when it comes to their women. We always complain that there’s never enough time but this segment could honestly have filled three Raw Divas matches. Ten minutes, perhaps more, is like the glass ceiling for Divas and to be able to smash that ceiling makes me want to fist pump Jersey Shore style quite frankly.

But the main factor in what made this successful is the women themselves. Each and every one. If this were an awards category, all five ladies — Beth Phoenix, Layla, Maria, Michelle McCool and Mickie James — would be nominees. Each Diva brought their A-game and each Diva it seems realised the potential importance of this segment in selling this feud. Layla and Michelle McCool over the past few weeks have upped their game in the acting department with McCool showing more personality and inflection in her voice than ever before. She may have her naysayers nonetheless, but to them I say: YouTube those early promos and compare. I challenge you not to notice a difference. As mentioned a few weeks ago, Layla has injected a soulfulness into this storyline that makes me wonder if it would have succeeded without her. She’s been one that has laid down and taken beatings from Beth and Mickie so convincingly while playing remaining an interesting character that has forced McCool’s to develop. Beth Phoenix’s conflicted tweener act has moved her away from being the stoic heel that was proving tiresome and added a new dimension to her character, making her that much more relatable.

Mickie has always been a fan favourite but she isn’t just relying on her popularity — James’ performance as the tortured victim has made fans want to root for her but it’s the juxtaposition of her performance last week that sealed the deal. Beginning the night with a rousing ‘everywoman’ speech and ending it humiliated, ashamed and as though she had let the fans down had a Buffy-esque warmth to it. To go off on a little tangent here, Joss Whedon [creator of ‘Buffy’] is perhaps the best writer for a female character on television and the way he wrote Buffy to be that strength for all women and as though she was fighting for not only herself, but the world — there was a quality in Mickie’s performance on SmackDown. Mickie’s mini-rise and then fall was what was needed to get the fans truly on board. Having her be humiliated for weeks on end and then finally fight back courageously only to be knocked back down again is a nice swerve from the predictable, fall-to-rise formula. Having that ‘faux rise’ on SmackDown with her working up the confidence to stand up to her aggressors and still be knocked back down, is perhaps a little more realistic. And the scene at the end of the segment, a long shot of Mickie in tears, so humiliated is enough to warm the coldest of hearts.

And finally, there’s Maria. Sweet Maria. Longtime readers of this site will know that we have always had something of a tit-tat relationship with the Diva of the Year — she’s a sweet person and we love in her real life but on WWE television, there has always been an unease about her character and an unease as a wrestler that has left us unconvinced. Having played the ‘ditzy, unlucky in love’ girl for so long, there has never been anything truly substantial about the Maria character — until now. Maria’s mic work on SmackDown was passionate, gritty and raw. The emotions that she exuded on the microphone could be felt by the viewer and her words felt real. She sold the emotion of her words as if they weren’t just lines she had learned, but as if they were her own. Where has this side of Maria been for so long? I don’t know but I love it and want to see more of it.

What we learned through this segment is that when Divas are given opportunities, they can deliver. When they are invested in with good writing, good timing and made to feel significant to the programme, the Divas can deliver. All of these girls have talents beyond what we have seen, it’s through poor booking that we don’t realise their potential. Seeing what these girls can do should give fans hope that there is talent in the women’s division and it’s always been there, it’s just been untapped. The girls you think you can write off i.e. Maria, can surprise you and the girls you think you know i.e. Mickie, can peel back a new layer.

I can only hope that this segment is as well received by management as it has been by fans and critics. Hopefully this will make WWE realise that the Divas can tell stories, that their angles can make the fans care, and that they can put on excellent performances too — just like the men.

Hopefully, this will set a new precedent for the women’s division. Start as you mean to go on. Perhaps the division can get back some of the prestige and respect it once had.