Daffney: From Padded Cell to Front and Center 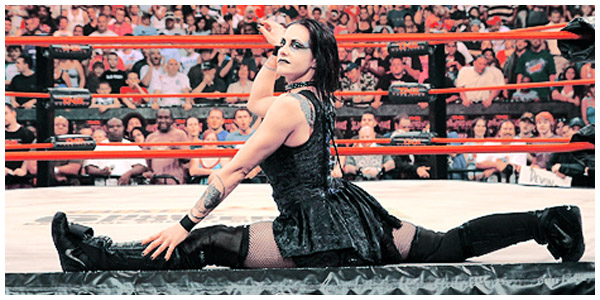 The TNA Knockouts used to be dominant fixtures on Impact with multiple matches and segments. They ushered in a brand new televised era of women’s wrestling that we haven’t seen since the Attitude Era and it was refreshing. They didn’t focus on the looks of their girls. They focused purely on their butt-kicking abilities and the fans in the Impact Zone, and at home, just ate it up. It gave all of us female wrestling fans many reasons to be proud. Unfortunately, things have changed thanks to the transition period TNA is going through via the Hogan/Bischoff era but that said, a noticeable bright spot as emerged. The shining light I’m referring to is none other than Daffney.

The woman born Shannon Spruill has become one of the most respected and loved female wrestlers in the United States. Ever since her days in WCW, Daffney has enjoyed a loyal fanbase that have followed her career and supported her every step of the way. A lot people were disappointed when Daffney and WCW parted ways. She had proven herself as a tremendous talent but luckily she stayed in wrestling and kept improving. Fast forward nine years later and Daffney makes her mainstream return to TNA. Some of the most amazing Knockout moments in recent memory have involved “Zombie Hot”. Daffney has more than overcome her lackluster start in TNA and has solidified herself as not only a serious competitor, but someone who could potentially become the next Knockouts Champion.

Daffney began her career after college, where it’s reported she majored in film and video production, along with minors in acting and music. She responded to a contest by World Championship Wrestling looking to hire new talent and lo-and-behold, they hired her. Someone came up with the idea to turn Spruill into Daffney and thank goodness for us fans, it succeeded. Daffney has the mentally deranged gimmick down better than anyone (man or woman) and is living proof that you can begin in a big-time company and become a success. Daffney wasn’t a trained wrestler when she began with WCW but while she was with the company, she learned the ropes. Her time with the Southern-based company allowed her to train and blossom into the performer known for taking ridiculous bumps and unleashing all her angst and fury onto her unfortunate opponents. The one bump that Daffney has that really stands out is at Bound for Glory. Abyss took Daffney and chokeslammed through her a barbed wire covered board. She paid the price in the form of a concussion but Daffney’s willingness to put herself on the line like that just proves how dedicated she is to the sport and why professional wrestling should no longer overlook her.

Thanks to the Hogan/Bischoff era, Daffney is no longer being pushed to the side. In recent weeks, we’ve been privileged to see Daffney emerge from the shadows as a legitimate threat to Tara, the TNA Knockouts, and that precious title the Californian carries around her waist. Daffney has decimated Tara and ODB, and not even her shrink, Dr. Stevie, seems to be able to handle her. Daffney has brought new life into a division that was getting horribly stale thanks to the Beautiful People. You can’t help but wonder if Daffney is finally getting her due thanks to her previous working relationship with Eric Bischoff, and if that’s the case, no one should complain. It’s about time someone sees the potential in this hard working woman. Daffney is a character that’s pretty special. You don’t see many girls running around these days screaming and trying to make people bleed. Most are cookie cutter blondes or other stereotypical beautiful girls and a lot of those are just pretending to be wrestlers. Daffney is the real deal, and she’s beautiful in her own unique way. Daffney’s looks, wardrobe, and personality are unconventional and just a fraction of what makes her so great. She’s gone from being an actress to one of the sport’s premiere standout stars. That feat in itself is pretty amazing.

The Daffney/Tara rivalry that is developing is a potential money-maker. These two women have the talent to pull off something special and it could very well get the Knockouts division back on track. As much as people adore Angelina Love, the Beautiful People, and some of the other girls, it’s nice to see Daffney and Tara leading the pack. In WWE, Tara (known as Victoria) had a similar gimmick to Daffney; she was basically obsessed with hurting Trish Stratus and I wonder if maybe TNA is going to take Tara back to that darker place. It’d be a dream to watch them build Daffney up into an unstoppable force who will literally do whatever she can to get her hands on the Knockouts Championship! Tara could try her best to stop Daffney’s reign of terror, but nothing she seems to try is good enough. Tara could draw on her past relations with Dr. Stevie and try and use him to get to Daffney. Not suggesting these two fight over him because they’re better than that, but if Daffney sees her closest ally getting cozy to Tara, she could potentially fall off the wagon. TNA loves to harp on the WWE and what they do, so why not use Tara and Dr. Stevie’s past? Tara could use Daffney’s mental breakdown to her advantage and these women could meet in a no holds barred, winner take all type of match in the near future. It would beautiful to watch Daffney and Tara tear each other to shreds, and it would be a throwback to the glory days of the Knockouts division. The division isn’t exactly ancient but it isn’t what it used to be and that’s a real shame.

Daffney is the best thing the Knockouts division has going for it right now. With all the drama surrounding Awesome Kong and the lack of ability on creative’s part to run simultaneous Knockout storylines, Daffney is the “it girl” of the moment. She is the best reason to watch TNA right now. She’s unpredictable, she’s bat shit crazy (for lack of a better term), and she’s just good. The character is going through an evolution process and hopefully this will come with a huge payoff not just for the character, but for the woman herself. Wrestling fans would surely appreciate it but more importantly, Shannon Spruill would finally get the recognition she deserves. Any woman who is willing to bleed for her sport and take ridiculous risks is a champion and should be treated as nothing less.