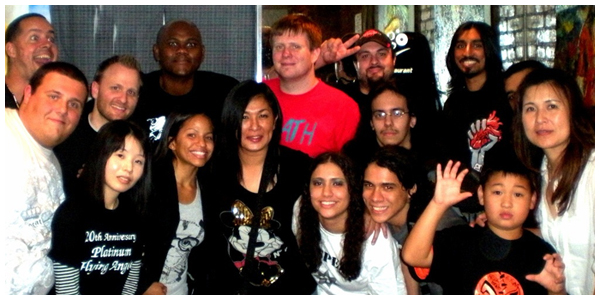 This past weekend US based women’s wrestling fans had a once in a lifetime opportunity to meet me.. err, I mean see Manami Toyota perform for the first time on American soil when she wrestled a weekend of shows for CHIKARA. Despite having seen SHIMMER only a weekend before, I knew I had to experience the woman widely known as ‘The Greatest Women’s Wrestler of All Time’ for myself. I also wanted to give my adoring fans a chance to admire me for themselves. I am as generous as I am humble…

Apparently, many others felt the same way, as the show not only sold out but the venue was also filled wall to wall with standing room spectators AND according to ringside gossip which I was, of course, privy to, 200+ fans were turned away at the door. Fellow wrestlers ‘The Rate Tank’ Kellie Skater and ‘Bonesaw’ Jessie Brooke felt it a necessity to attend this show and both told me that it was a dream come true to see Manami Toyota wrestle in person.

Following the event, Manami Toyota signed autographs in the lobby. Knowing that the demand for a moment with the living legend would be of epic proportions (Diva Dirt fan John Hyperion and I even met one fan who flew out from Japan to see Manami wrestle in America), CHIKARA provided the entire bar area for Toyota’s signing, which lasted close to an hour. During this time I had the privledge of meeting and speaking with Yolanda Jerigan, owner and founder of GIMICK$, a t-shirt line that is very over with the wrestlers themselves (she designed the ‘I Love Heels’ shirts featured in that infamous Awesome Kong/Alissa Flash photo). Ms. Jerigan is also a designer of wrestling fashions (ring gear) and designed the gear Sara Del Rey wore in the main event that night. While Ms. Jerigan had every reason to sit back and allow me to praise her talents and beg for free fierce fashions (which I would still like please), she instead chose to tell me how much she loved Diva Dirt, how her company checks it everyday and how she views us as THE Women’s wrestling website. The success of this site continues to amaze me and is in large part thanks to the loyal readers who allow the staff to experience moments like these.

After Manami had greeted her flock of fans (and I had greeted my one, holla!) a fortunate few of us were shuttled to a celebratory afterparty hosted by Itsuki Yamakazi, a former member of the Jumping Bomb Angels and owner of the phenomenal Go Restaurant (30 Saint Marks Place, New York, NY). Yamakazi, a living legend herself, actually trained Toyota and has stayed in touch with her throughout the years.

The dinner was arranged in one long table format with Manami and her translator seated center. (Side note: the translator was very accomodating and incredible and she runs Manhattan Drop, an American indy wrestling site for Japanese fans). Throughout the incredible dinner, which consisted of three courses including the best sushi I have ever eaten, fans were able to ask questions to Manami via her translator. Below are the questions asked during the Q&A portion of the dinner:

Who was your favorite opponent of all time
Manami mentioned enjoying wrestling larger wrestlers, which are hard to come by in Japan. She identified Aja Kong and Kyoko Inoue as two of her favorites.

What was it like working in New York City?
Manami very much enjoyed the New York show, and was surprised that she was so well known. She has only been to America one time before, but hopes to return.

What made you decide to become a wrestler?
Manami identified the Crush Girls, and an event in which she saw them live (video here) for inspiring her to get into wrestling.

How did you create your signature moveset?
Manami developed the Japanese Ocean Cyclone Suplex by via ring experimentation. Manami stated that it was important for her to create an original moveset. She created the Queen Bee finisher because she wanted a move that would look impressive against larger opponents.

After a fan mentioned enjoying her double missile dropkick to Sara Del Rey and Claudio Castagnoli from the turnbuckle to the outside of the ring, Manami laughed and joked about she makes sure to only utilize that manouver when there is padding on the floor.

Were you surprised at the fan reaction?
Manami once again emphasized how shocked she was to see how many fans knew her. She was also excited about how far some people had travelled to see her and that we wished to eat dinner with her.

What do you think of Sara Del Rey?
Manami mentioned that she had previously faced Del Rey in Japan in 2005 (DVD on Sara’s site and on sale at all indy shows at which Sara makes an appearance) ), and said that her style has changed and she is improved. She also acknowledged that she kicks quite hard, which she seemed to appreciate

How do you select your fashions? (Guess who asked this)
Manami had a private designer for all of her ring costumes. Unfortunately, he recently passed away and she is at a loss as to who to utilize next.

Toyota then stopped to ask why nobody was drinking. She explained that she enjoys it very much and enjoys beer which she will then follow up with sake. As the only other drinker in the crowd, this led to my own personal Manami moment as I was invited to do a shot of hot sake with her.

What was your best match?
Manami was unable to select a best match because as she is very critical and judgemental of her own work. This attitude is shared by Sara Del Rey, largely regarded as the best American female professional wrestler working today.

Manami was also unable to remember individual matches and events, which is understandable for a 20+ year veteran.

Would you like to come back to America?
A definite theme of the night, this question was a fitting conclusion to the Q&A portion of the meal. Manami seemed touched at her American wrestling experience and stated that she hopes to come back (even though initially, these shows were marketed as a “bucket list” dream of Toyota to wrestle in New York City before she retired). Ever the gracious host, Manami closed the dinner by thanking us several times, signing personalized CHIKARA trading cards to each of us and giving signed CHIKARA promo posters to four lucky raffle winners (which I wasn’t, boo).

This afterparty will go down as not only one of the highlights of my women’s wrestling fandom, but of my entire life. If Manami does indeed decide to return, I know that the shows would once again sell out and that I will travel in order to partake in her talents once again. Manami was not only a sight to see in the ring, she was appreciative, humble and humorous outside of the ring and despite the fact that her English was very limited, made an effort to exchange kind words with each and every person (she is also a great drinking buddy, FYI).

The fact that this many fans came to see a woman headline a wrestling card disproves the WWE mentality that women cannot draw and shows that when talented women are allowed to improve and shine, fans will get on board with a women’s wrestling division.

Thank you for reading this long winded report and thank you Manami Toyota, GO restaraunt, Manhattan Drop and CHIKARA for the great experience! Also thanks to John Hyperion for his collaboration on this report.