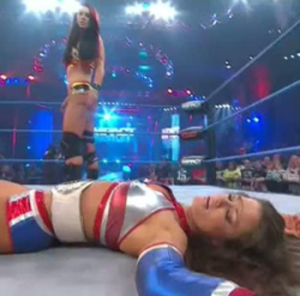 As a teacher, what does one do when one sees their pupil, their student… their best friend capturing all the success in the world? They snap and claim it all for themselves, that’s what! At least according to Impact Wrestling’s own Tara, who took it upon herself to bring a screeching halt to the accolades Brooke Tessmacher was racking up around the middle of the year.

It all began on August 3rd, as Tara called Brooke out during an edition of Open Fight Night just seven days after Brooke reclaimed the Knockouts Championship for the second time. What began as a friendly encounter actually ended up being the beginning of the end for the BFFs, as just three weeks down the road, the veteran decided that enough was enough. She couldn’t live another day watching Tessmacher take the glory and success, when in her mind, Brooke wouldn’t even know a roll-up that didn’t involve fruit existed, nor that a bulldog could reference more than either an animal or a Georgia based sports team, without her guidance and tutelage.

Ultimately, Tara would put her money where her mouth is and end the second reign of Brooke Tessmacher as champion when she defeated the Texan at Bound for Glory to claim her fifth Knockouts Title.

This deeply personal feud provided some of the most exciting television of the year in WWE or TNA as we saw the one-time BFFs and Knockouts Tag Team Champions implode. It’s a story as old as time — tag team partners breaking up and feuding — but sometimes it’s the simplest things that are most enjoyable.

Brooke vs Tara was the ultimate embodiment of good vs evil, and the pair, knowing each other so well, took each other to the limit.