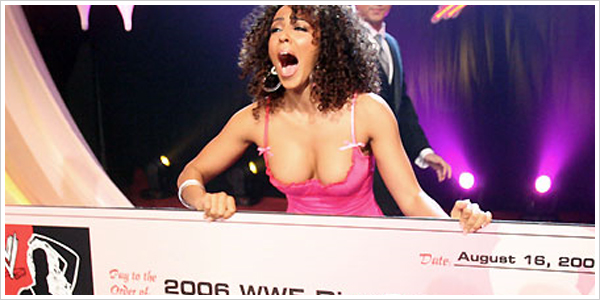 Fittingly, tonight is the Emmy Awards – which honours television shows – which as you know, seem to get cancelled after two episodes these days. But after four years, WWE has finally cancelled it’s own reality show-in-a-show, the Diva Search. And about effin’ time.

The Diva Search has provided some fun moments (well the first one anyway), some controversial Divas and some annoying Divas. Ashley Massaro, we will never forget you (for all the wrong reasons). But one could argue that the Search has given us an impressive crop of talent who’ve gone onto shine in the WWE including former Women’s Champion, Candice Michelle, first ever Divas Champion, Michelle McCool. Maria is easily one of the most popular Divas in WWE right now, while Maryse and Layla have grown into their own and are personal favourites of Diva Dirt. RIP Diva Search.