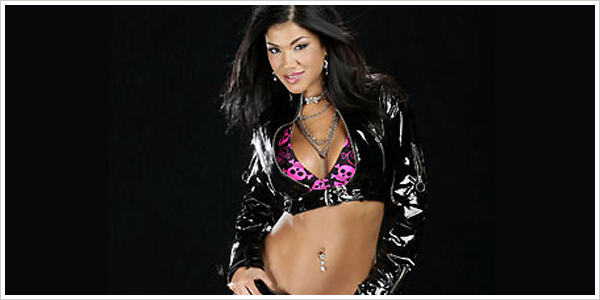 It seems that the stars are aligning for the WWE women’s division, as two of their brightest developmental talents are joining the main roster. Earlier this month, Victoria Crawford debuted as Alicia Fox on SmackDown and now it seems that former Diva Search contestant, Milena Roucka could be headed to Raw… all thanks to Santino Marella. You see, Santino in a recent interview revealed that he should be getting a new on-screen girlfriend very soon:

â€œI think I may have a new on-screen girlfriend coming up. Iâ€™m not sure exactly when or how. But the person they chose is in developmental, and sheâ€™s very sexy, youâ€™ll want to hate her. Sheâ€™d be a really good match. Iâ€™m just happy I get to kiss her once in a while,â€ he laughed.

â€œJust in case, sheâ€™s not the right person, I donâ€™t want to tell you her name,â€ he explained. â€œSheâ€™s actually Canadian. Iâ€™ll leave it at that.â€

What’s this got to do with Milena? Well I harken back to this post that I wrote when Alicia made her SmackDown debut, I wrote: “In the space of two weeks, ECW and SmackDown! have both gained new Divas. What about RAW? I have my eye on one Milena Roucka, a former contestant in the 2006 Diva Search which was won by Layla. She too, has gone onto become an experienced wrestler and a former OVW Womenâ€™s Champion.” Reader Walt left the following comment:

I might have some insight into the Roucka situation. Purely speculation of course.
I was at the FCW show in Florida this past Tuesday. The Divas had a talent contest. Rouckas talent was to recite a love poem which she wrote to none other than Santino Morella. She was expressing her love and respect for him. She never finished the poem as a diva brawl broke out. I fully expected to see Morella come out for an appearance. He of course did not. This might be a precursor to Roucka going up to Raw and starting a program with Santino. Who knows!!

A little glance at Roucka’s Wikipedia page confirms she is Canadian, so what do you say folks. Can we put two and two together and close this case?