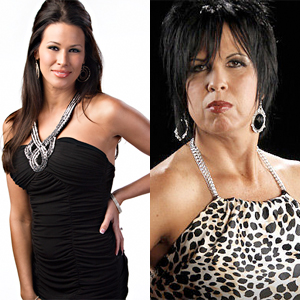 Vice President of the Knockouts division, Karen Jarrett, found herself in the eye of a Twitter storm last week as users of the social networking site perpetuated drama between her and WWE’s Vickie Guerrero.

The drama began when the WWE star retweeted a somewhat negative comment from a fan which read: “@KarenJarrett = @ExcuseMeWWE #TNAAwful.”

Karen retweeted another fan, who wrote: “@ExcuseMeWWE How is @karenjarrett copying you when she was on tv way before you ever was?”

The Knockouts VP then wrote: “Oh these twitter games……. Funny 2 me…2 people retweet 2 tweets & look at all the attention! LOL.”

Speaking exclusively on DD360 earlier this week, Karen says she has no issues with Vickie: “To be honest, I think Vickie is an incredible woman. She was a great wife and she’s a great mother.”

Responding to the drama that was created, Karen said: “As for the fans and the marks out there, or the people who get behind their little computer, you throw out some bait and they jump on it and I think people ran with it. It is what it is.”

“I have great respect for Vickie and her raising her daughters and everything that she has done,” Karen concluded.

You can listen to the full interview with Karen by catching a replay of DD360 at this link.

Thoughts: Karen and Vickie do have a lot in common — they were married to wrestlers and became characters on TV, play villainous roles etc. — but so what? They both serve a purpose to their product and both do a great job, I feel. I’m personally a big fan of both characters. Alas, it’s the internet way to pit people against each other (see: Trish vs Lita).