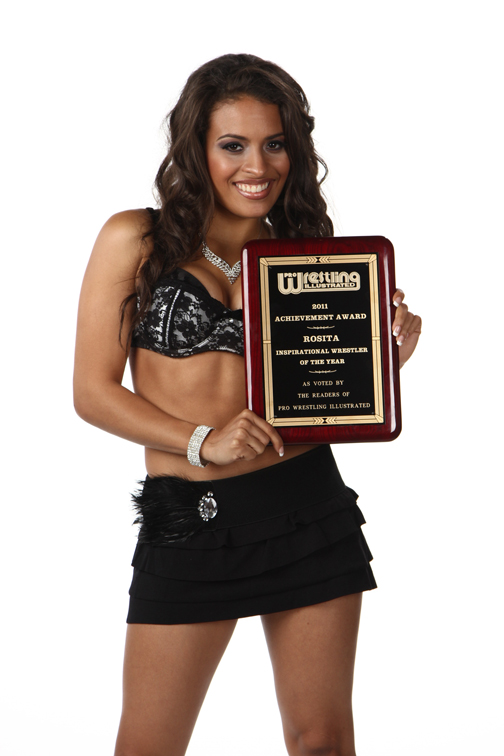 Capping an incredible rookie year, it was announced earlier this week that young Rosita — real name Thea Trinidad — has been crowned 2011’s Inspirational Wrestler of the Year by Pro Wrestling Illustrated.

And it has indeed been an inspiring year for the 20-year-old Impact Wrestling star, who in September mourned the 10th anniversary of her father’s passing during the 9/11 terror attacks in New York. But rather than letting that anniversary define her year, Rosita marked it by achieving her dream of becoming a wrestling superstar and making her father proud.

In 2011, Rosita earned worldwide success when she joined Impact Wrestling, where she quickly won the Knockouts Tag Team Championships with Sarita and landed the cover of Mexico’s Super Luchas magazine.

Speaking on her whirlwind year, Rosita told us exclusively on DD360: “It’s been a crazy journey so far. I look back a couple of years ago, and seeing where I am now, there’s no way I thought I’d be where I am right now.”

“It’s truly amazing to see where determination and drive will lead you. From people telling me, ‘Oh no, you’re too small’ and ‘You can’t do those things that everyone else can do because you’re so small’, and you put those people to rest saying, ‘I can do this no matter what’. I had Tommy Dreamer, who’s amazing to me, from the very first day I met him — he actually was the one to say to me, ‘I believe in you, I know that you can do this. Let’s see what you can do at TNA’. Everybody at TNA has been amazing to me too, so I’ve been truly blessed on this whole [journey].”

And Rosita’s journey wasn’t just recognized by the fans, or by Diva Dirt, but the folks at the respected Pro Wrestling Illustrated magazine too. They crowned the pint-sized Knockout their Inspirational Wrestler of the Year, an honor previously bestowed upon the likes of Shawn Michaels, Ric Flair and other huge names in the business.

“I remember when I was first presented the award, I was amazed. Usually when I’m shocked, I’m like, ‘Oh, my God’ — I just lose my breath and I [get] lost for words. I just looked at it like, ‘Oh, my God, this is amazing’.”

“I just remember bringing it home to my mom and she just started crying,” Rosita continues. “She couldn’t even believe that her daughter — her crazy little daughter [Laughs] — actually touched the lives of other people to say that I’m an inspiration. It was an absolute honor.”

Speaking on the company she keeps in the winners’ circle, Rosita admits that she was somewhat speechless.

She said: “To follow 2010 [when] Shawn Michaels had it, he’s one of my favorite wrestlers as well, and it’s an honor to be on that list, [and] to be the first female in history to win this award, but just to win it in general is amazing. To follow in the footsteps of Sting, Hogan, Jeff Jarrett… some really good guys who’ve left footprints on such an amazing business, it’s an honor to follow them.”

Congratulations to Rosita on her wonderful year and winning the Inspirational Wrestler of the Year award.

Listen to the full interview with Rosita by catching a replay of this week’s DD360 at this link.