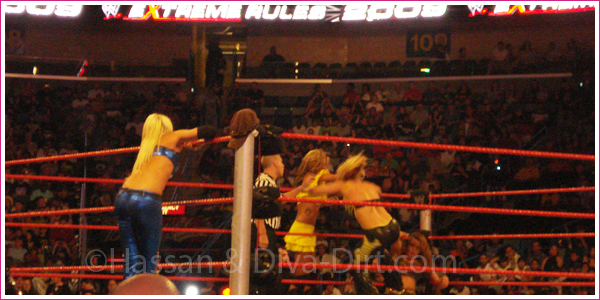 While the results from the Dark Match at Extreme Rules were posted earlier, I figured I’d give a more in-depth look at the matchup where Beth Phoenix and her intern Rosa Mendes took on Kelly Kelly and Mickie James. The quote I sent to Steven for the previous post was a pretty frantic text message as it was fairly hard to take pictures, record the matchup on video and text all at the same time while making sure I gave Diva Dirt the exclusive results coverage of the match as quickly as my fingers could type, not to mention that moron who spilled his beer on my newly purchased Extreme Rules t-shirt. I was extremely glad the Divas did get a matchup because frankly I was a little upset I paid close to $100 just to see that Hog Pen Match. So here’s my own coverage of Extreme Rules, live from New Orleans, Louisiana,Â where yours truly got to experience a great event and was in attendance for one of the best PPV’s of the year.

At the very beginning, the matchup was actually pretty confusing. Tony Chimel was the ring announcer for the match, but right before he came into the ring, Lilian Garcia told us we were going to have a special dark match. Once Tony got in the ring, he simply announced the Divas coming to the ring. Rosa’s name wasn’t mentioned in the introduction either. Nobody knew it was even a tag match since we just thought Rosa was coming with Beth to the ring. Kelly Kelly and Mickie James were just introduced as individuals, so we didn’t catch on to it being a tag team match until it actually began. While entering the ring, Beth started doing a wrong pose, which I thought was pretty funny. She started raising her right hand alone and then midway realized she wasn’t supposed to do that and stopped the pose, then raised both her hands in the typical Glamazon stance.

Once the Divas began coming to the ring, my natural instinct was to record the match for everyone here at Diva Dirt to witness. However, about two minutes into the actual match, security caught me recording and came over to me and asked me to stop filming or else my camera would get confiscated. So while I will be getting the video up for you all shortly, it will only take you through the entrances and midway through the match. And yes, I was talking for part of the video so you’ll enjoy that too.

The match began with Kelly Kelly and Rosa Mendes squaring off in the ring. Rosa got the upper hand first, locking in an armbar and twisting Kelly’s arm over and over again. Kelly reversed the armbar into a quick 1-count rollup on Rosa, followed up with a jumping clothesline and a tag to Mickie James. Mickie did a really interesting move where she lifted Kelly up into a modified Glam-Slam andÂ dropped her down on top ofÂ Rosa.Â Mickie locked in some more offense before Rosa countered and put Mickie into another armbar and dragged her over to make the tag to Beth Phoenix, who had been screaming at Rosa the entire time. Beth was really on top of her game tonight and she entered the ring into a stare-down with Mickie before the two started throwing each other around. Beth had most of the offense here on Mickie and Rosa came in for some double teaming on Mickie while the referee was distracted with Kelly. Mickie hit her Lou Thesz press on Beth, then Beth grabbed Mickie and did a huge slam on Mickie which got a huge reaction out of the crowd. Beth tagged Rosa back in and Rosa basically got beaten up by Mickie. Beth was going nuts on the apron stomping and screaming at Rosa while her hair was flying everywhere. I was extremely impressed by Beth in this showing.

Mickie brought Rosa over to her corner and got a tag in to Kelly who came in with a Sunset Flip for a 2 count on Rosa. Kelly then got pushed on to the mat by Rosa and Rosa delivered some big punches to Kelly’s face. Kelly countered Rosa’s Irish Whip in to the corner and did her usual “COME ON!” chant to the crowd, who responded nicely to it while she did her back handspring elbow. Kelly tagged in Mickie who put Rosa in the opposite corner and delivered her twisting leg scissors to Rosa. This brought Beth in who tried to attack Mickie but was tackled and taken out the ring by Kelly. Mickie hit her Mickie-DDT onto Rosa and scored the pinfall.

The match was really good from start to finish. Aside from Rosa not really showing any offense other than armbars, I thought all the Divas did a great job. I guess since it was a dark match, it was actually pretty long for a Divas match, going on for about 6 orÂ 7 minutes. There was a mix of cheer’s and boo’s for Beth and Rosa. Kelly got an enormous pop and Mickie got an even bigger one on their way to the ring. Whenever Mickie was tagged in, the crowd really went nuts. Mickie got one round of chants while Kelly had the fans chanting her name and “Let’s Go Kelly!” for most of the match. When it was over, Beth pulled Rosa out the ring and literally just picked her up with one arm and carried her backstage while Mickie and Kelly celebrated. I really thought the fans weren’t going to be that into the Divas match and use it as an early bathroom break, but everyone stayed into the match, cheered throughout it and after it, and made a lot of chants and cheers as well as “OOOOH’s” for the big moves.

As for the Hog Pen Match featuring Santina and Vickie Guerrero, I will say that I was surprised about the entire event. I really wanted to hate Santina so much and I didn’t even want to watch this match, but I will say that Santina was a great comedy act to watch. I don’t ever want to see him/her compete for a title, beat Beth Phoenix again, or replace the Divas, but I was laughing throughout the entire match, which I wasn’t expecting to do at all. Santina was really nice and did come over by our section and boy did he/she smell! Vickie’s scream is really as loud as it seems on TV; they were on the opposite side of the ramp from where I was sitting but you could hear that shriek from anywhere in the arena. Another thing I noticed was that everyone around me was really hating on Santina too. I heard numerous people ask “why does Santina still exist?” and even a few people express their anger over Santina replacing the Divas for a better match. People seemed to like Santino, but not Santina and share our anger with this entire storyline being extended for way too long, which I was really happy to hear. I’m not going to be an overnight Santina fan, but I really did enjoy seeing him/her in person and witness this match and I am more on Santina’s side than I ever was before.

Overall, it was a great event, and I encourage everyone to watch the entire show if you haven’t already. The crowd was more electric than any of the two SmackDown’s I had been to before. I was a little disappointed there weren’t more Divas, however. I thought they could have at least includedÂ Maryse in the Dark Match. Maria did come for an autograph signing at a local Best Buy, but I really didn’t feel like buying something for her to sign and waiting in line for over an hour, so I do apologize if you wanted to see her picture. Now if it had been Maryse… well, that would’ve been a different story!

I was completely blown away with the cashing in of the Money In The Bank since I am a huge Jeff Hardy fan and was going nuts when he won. After the show went off the air, Jeff came into my section and I was able to shake his hand and pat him on the back. Another exciting moment was after Tommy Dreamer’s victory; he also was heading backstage and decided to jump the barricade into my section and run into the stands. Naturally, I jumped in front of the nearest camera and gave Tommy a big high-five. I was also on TV right before Batista’s music began playing, so if you’re watching the event again, look for me! I’m wearing a navy and yellow striped Polo shirt LOL!

I’ll be posting exclusive pictures and videos of the Dark Match right here on Diva Dirt, so stay tuned!