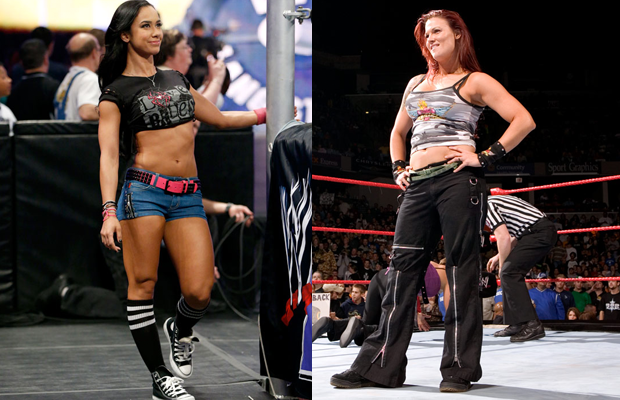 Perhaps most obvious beneficiary of Lita‘s legacy is AJ Lee. The record-breaking Divas Champion has a lot to thank Lita for. Her style, with her denim shorts, torn-up tees and Chuck Taylors, bucks the trend of Diva clothing. Lita was one of the very first to do that, mixing elements of her tomboy style with flashes of sexiness.

AJ’s extensive merchandise offering mirrors Lita’s as well, with the shirts, jewelry and miscellaneous items that appeal to men, women and children alike. Like Lita, she incorporates many of the pieces into what she wears on television.

AJ’s interactions with male stars helped elevate her in the eyes of fans before she became a true force to be reckoned with in the ring, much like Lita did with The Hardy Boyz and the main eventers she often crossed paths with.

These, and many other factors, add up to AJ: a woman whose primary influence is crystal clear.