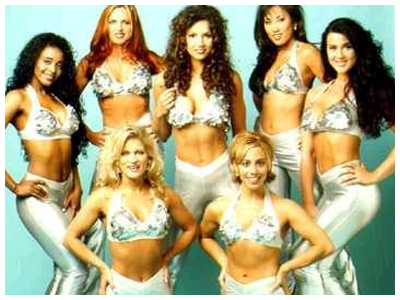 Former WCW Nitro Girl, Spice (real name Melissa Bellin) was the latest special guest on Monday Night Mayhem, and commented on the possibility of a Nitro Girls reunion at WrestleMania 27 next year. Of course, ‘Mania will take place in Atlanta, the old stomping ground of WCW.

The likelihood of a complete Nitro Girls reunion at WrestleMania XXVII in Atlanta (the home of WCW) and whether or not she could actually see that taking place: “It would make phenomenal sense. A lot of are still pretty accessible to the area. We would all be completely open to it. Two years ago, we did a reunion for Jimmy Hart down in Orlando. Five of us got together, did a choreographed routine in the ring, and the fans loved it, and it was a ton of fun. So if there is interest from the fans, I think it would be great.”

Melissa also spoke on the popularity of the Nitro Girls and how she doesn’t feel the concept could have lasted longer:

What she liked and/or disliked about the direction of the Nitro Girls and the transition of being just dancers to in-ring performers & valets: “I think it was a shame because it was such a popular concept. I think it was an element that’s really been missed. We still hear it from the fans all the time on Facebook. People reach out to us all the time and say ‘Man, we really missed the Nitro Girls.’ When the group was created, Eric Bischoff was saying that valets were a thing of the past and that they wanted to move things in the right direction. I always remember that opening night. The response was tremendous, and it continues 13 years later. On one hand, I think it was just wrestling on a whole was remise to not continue with that concept in some form or fashion, because the fans really enjoyed it. Then at the end of the day, everything changes. I think they could have still differentiated themselves, but I think the problem WCW made is that they tried to be like the competition. When they tried to play the same game as WWE, they couldn’t hang, because Turner was a whole different media outlet, and we had a lot of restrictions.”

And just for lulz, here’s some Nitro Girls performances: