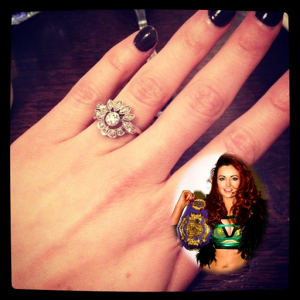 Ring of Honor’s First Lady of Wrestling broke the news on her Twitter account alongside an image of her ring.

The AfterBuzz TV host’s fiancé is Mike Bennett, whom she has managed in ROH, CHIKARA and in FWE, where she is also the reigning FWE Women’s Champion.

The ecstatic former Diva of the Year simply posted the following on her Twitter: “We’re engaged!! @rohmikebennett and me!!”

Thoughts: Congrats Maria! You and Mike have had a lot of success in the ring and we wish you so much more outside of it!