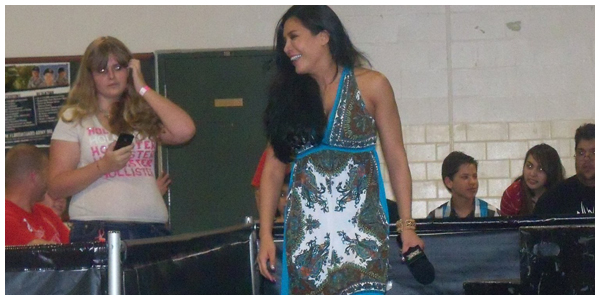 Former Women’s Champion, Melina made her much anticipated return to FCW last night at a live event in Orlando. Diva Dirt reader, Jasmine has sent us a full report of what happened plus pictures! Check it all out below:

* Melina was extremely, extremely nice. I managed to get in line nice and early (there was probably 50 people wanting to see her). I just basically went up to her, opened a notebook I had bought and asked her to sign wherever she liked. She wrote a heart and put her initials inside it and asked for my name after. So then… picture time~! The music was blaring, not sure what song it was but we shared a jiggle XD. She had a chuckle at that. I gave my camera to a guy for him to take pics of me and her. I have absolutely no complaints about my favorite Diva at all… she looked good, she was friendly as all heck, she took pictures with everyone, signed everything.

* As for the Divas bikini contest, it was basically Alicia’s sister, skinny ODB look-a-like who kept flaunting her bootay for the cheap pop I suppose, Liviana, AJ Lee, Aksana and Jamie Keyes (who was AMAZINGLY over, she got the loudest pop of the night easily! Low-Ki was over-over, but Jamie was more over… perhaps her good looks suits the majority of the audience or something). All Divas took off their bikinis except AJ who refused to do so. So they do all that and when it was time to announce the winner it was AJ Lee ’cause like the host of the contest was a heel here. All the Divas were shocked saying, “That’s messed up,” “That’s wrong,” etc. AJ Lee’s like “HA HA HA” rubbing it in everyone’s faces.

Melina then comes out and they had a war of words. Of course she didn’t approve and made sure AJ knew. Unfortunately, I can’t provide you the words that was said as it was hard for me to understand it, but it came across well nevertheless. It ended with Melina slapping the ever living heck outta the host and showing some spunk in the process. She had a hug with Alicia’s sister afterwards and just made sure to go to each face Diva and say something to them. It would be pretty sweet if Melina’s return to FCW in the near future would be a feud with AJ Lee considering her being a fan of Mel so it’d be swell~

* Tamina was watching the majority of the show with some guys.

* Much like Melina, Jamie Keyes was certainly very personable, nice, friendly, etc. She’s gorgeous live, I can certainly see why the majority of the audience would pop for her.