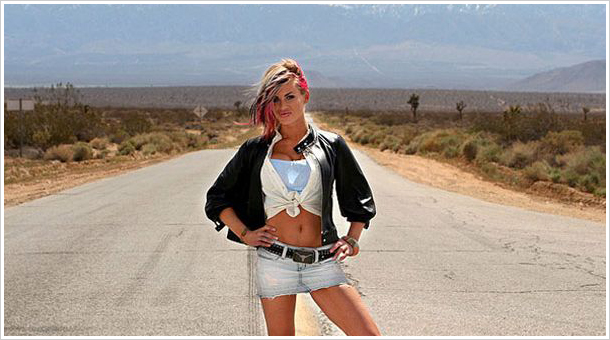 Okay, so Stone Cold Steve Austin has absolutely nothing to do with this post, I figured it was sort of relevant, as our favorite headline generator Ashley is set to star in the music video for Rev Theory’s “Hell Yeah”. Though, adding Austin in does make this post exponentially cooler, no? Anywho, WWE.com has the lowdown on the music video and the “Dirty Diva”‘s involvement, along with photos from the shoot and a behind the scenes look of the video.

Ashley explained how a chance meeting at WrestleMania XXIV led to her becoming part of the video [for â€œHell Yeahâ€]. â€œAt WrestleMania, we got along really well. We were just kicking it backstage and they said â€˜weâ€™re shooting a video this Friday and you should be in it.â€™ And I was like, â€˜All right. Iâ€™m not doing anything on Friday. Letâ€™s goâ€™.â€

And go she did. Like last yearâ€™s appearance on Survivor: China, the video shoot had just the hint of danger that Ashley enjoys. â€œI actually got to drive a car up to 110 mph,â€ Ashley said with a grin. â€œWe were in the middle of nowhere, just ripping it.â€

Sounds absolutely fascinating! Personally, I’ve lost interest in music videos long ago. They’re basically all the same these days. Anything since Snoop Dogg had people morph into dogs and TLC liquified themselves has been simply dull.

In case you’re wondering what the song sounds like, here it is: