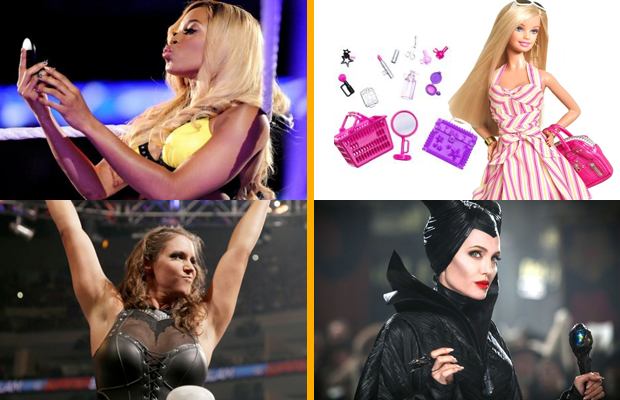 Happy Halloween! We’re celebrating our seventh anniversary of dreaming up Halloween costumes for the Divas and Knockouts. This year we’ll be splitting up the women into three categories: NXT, TNA and WWE.

But before you see this year’s picks, be sure to catch up on the past six years of this feature:

For the final part of our feature, we have the WWE Divas:

AJ Lee as Wyldstyle from The Lego Movie

Wyldstyle, female lead of The Lego Movie, is an all-around badass. She spends much of the movie saving the hero from certain doom, subverting a few tropes along the way. Self-professed geek AJ would be a perfect choice to step into Wyldstyle’s plastic shoes, uttering (intentionally) cheesy one-liners and sporting pink and blue streaks in her hair. That’s not even mentioning the fact that Wyldstyle’s boyfriend is Batman. Something tells us AJ would be into that.

Alicia Fox as Solange Knowles during her elevator incident

Last May, video leaked that showed Beyonce’s sister Solange attacking Jay Z inside an elevator, setting the gossip world on fire. That same month, Alicia Fox suffered several on-air meltdowns, attacking commentators and stealing sodas from fans. Coincidence? Knowing the WWE, probably not. Alicia should pay homage to her fellow hot-headed Diva by sporting the dress she wore that fateful night. A good old fashioned Alicia Fox Meltdown™ would be in order, of course.

The issues between the WWE’s favorite feuding twins seem tame when compared to those of the sisters in Guardians of the Galaxy. Unlike the Bellas, these sisters fight to kill. Brie and Nikki haven’t reached that level of animosity yet, thankfully. Perhaps some therapeutic roleplaying would inspire the Bellas to put their differences aside. At least they don’t hate each other that much.

Since turning heel and breaking away from Naomi earlier this year, Cameron has shown an affinity for props, bringing compacts and lipgloss to the ring. She’s even been known to pause mid-match to reapply her makeup. In that way, she’s much like Barbie, who is rarely without a slew of girly accessories. Cameron doesn’t have a full head of Barbie-esque blonde hair anymore, but that’s nothing a wig can’t fix.

Eden as Gale Weathers from the Scream movies

Granted, Eden’s more modern Gale than vintage Gale, but the news reporter’s 1996 Scream look, with her frosted hair and neon suit, is undeniably costume-worthy. We’d love to see Eden chase down Superstars and Divas on Raw Fallout with that look, using whatever dirty tactics necessary to bring the WWE Universe the juiciest stories possible.

Emma as Piper Chapman from Orange is the New Black

This year saw Emma make her main roster debut, dancing into the hearts of WWE fans everywhere. Unfortunately, though, her most memorable moment from 2014 will likely be her shoplifting arrest. However, Emma’s a good sport, so she should acknowledge the elephant in the room by dressing as the star of Orange is the New Black, which is set in a women’s prison. Maybe putting on the prison orange will convince her to be a little more careful the next time she uses the self-checkout lane.

Eva Marie as the Annabelle doll from Annabelle

The real life Annabelle doll, which inspired parts of The Conjuring and the entire Annabelle movie, looked more like Eva Marie than the movie version, sporting Eva’s shade of red hair. In fact, it was actually a Raggedy Ann doll. But if Eva wants to get really creepy this Halloween, she should take on the look of the porcelain doll from the movie, pigtails and all. You know, “all red everything” kind of sounds like a threat, when you think about it.

Lana as Natasha from The Rocky & Bullwinkle Show

During the Jack Swagger/Rusev feud, Zeb Colter loved to refer to Lana and the Bulgarian Beast as “Boris and Natasha”, the Russian villains from the Rocky and Bullwinkle animated series. Lana was obviously not fond of the nickname, but why not embrace it? She could sport a black wig and purple dress, showing the WWE Universe that contrary to popular belief, the Ravishing Russian can take a joke.

The dynamic dancing duo went from enemies to besties in the course of weeks, providing a shining example to women everywhere. In the spirit of female friendship, they could pay tribute to another pair of television BFFs: Kathie Lee and Hoda of the Today show. Let’s hope the Slayers took a few notes during the pair’s Raw appearance a few weeks back.

Now, this isn’t meant to make a mockery out of the former WWE announcer. Rather, it’s meant to celebrate Lilian’s triumphant return to the WWE main stage as Raw’s ring announcer. A nicely cut suit and a deeper delivery would be all Lilian needs to channel the man whose spot she’s filling. She’d have to be precise with her voice impression, though, lest people think she’s impersonating Howard Finkel.

Naomi as Nicki Minaj in the “Anaconda” music video

Nicki Minaj’s music video for “Anaconda” is decidedly not PG, but there are ways for the master of the Rear View to pay homage to it. Give Naomi a prop snake and one of Nicki’s less revealing outfits, and the audience can put two and two together themselves. If that doesn’t get the job done, Naomi can perform a few of her butt-centric signature moves. Just mute the commentary team’s microphones, please. We don’t need to hear Jerry Lawler quote Sir Mix-A-Lot.

On the latest season on Total Divas, we saw Natalya’s marriage break down. She and Tyson Kidd are considering divorce. We just hope that if they do split, it goes as amicably as one of the year’s biggest celebrity divorces: that of Gwyneth Paltrow and Chris Martin. Gwyneth has managed to persevere, so we think Nattie could stand to take a few cues from her. Gwyneth’s first tip would probably be to not air your dirty laundry on a reality show, but hey, what’s done is done.

We know – there’s probably no one in the WWE less like Kim Kardashian than Paige, but that’s the joke. With Paige joining Total Divas in January, she could start to acquaint herself with the American reality TV world by taking on the style of the most famous Kardashian. Of course, this costume wouldn’t be complete without a cameo by her mother Saraya Knight as momager Kris Jenner. Now that would be a transformation.

Renee Young as the “Fuck it, I quit” reporter

Last month, a reporter in Alaska quit her job on air in protest of stringent anti-pot laws. She memorably stopped mid-report to say, “Fuck it, I quit.” and leave the studio. Few women would have the comedic chops to imitate that moment, but Renee is definitely one of them. We think a WWE-sponsored parody would probably involve something other than F-bombs and pot, but as long as she’s exasperated and “quitting”, we’ll take it.

Admit it: you probably thought you had seen the last of Rosa on WWE television before she joined the cast of Total Divas. We can picture Rosa now, turning around and uttering the iconic words of American Horror Story‘s Madison Montgomery: “Surprise, bitch. I bet you thought you’d seen the last of me.” Talk about a plot twist.

This year’s Maleficent sought to make the villain of Sleeping Beauty a sympathetic figure, but we’re much more interested in the purely evil. Like, say, Stephanie McMahon, who makes no bones about her wickedness. This year, Stephanie staged her comeback as an evil genius, demonstrated in her victory over Brie Bella at SummerSlam though Nikki’s betrayal. Hell, now that we think about it, Maleficent could learn a thing or two from Steph. The costume is only a formality at this point.

Tamina is currently sidelined with an injury, but what doesn’t kill you makes you stronger, right? Tamina could take a cue from the nearly indestructible cyborg Arnold Schwarzenegger made famous. For this look, she could take a cue from the version seen in the Sarah Chronicle Chronicles TV series and keep it simple, having a few telltale mechanical parts peeking through. No “I’ll be back” jokes, we promise. Oh, wait.

Which of these costumes is your favorite? What are your ideas?