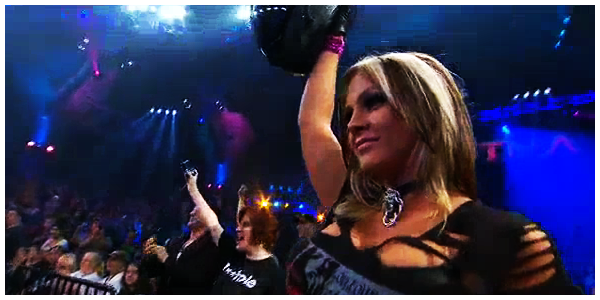 If you’re anything like me, then you cringed a few weeks ago when Angelina Love won the right to compete for the TNA Knockouts Championship against Madison Rayne. The outcome was all to predictable and of course, TNA once again went with the obvious. Outcome aside, was the match a must-see?

The challenger was the first to make her way to the ring and for once, Angelina looked almost okay. Her outfit wasn’t a complete eye sore and the color combination (a nice turquoise and black) suited her. Madison walked out a few seconds later dressed in a pink and black two-piece outfit, complete with skirt (Skirt Madison?) and bad hair extensions.

It’s a good thing wrestling isn’t about fashion. Wrestling also isn’t about which Knockout can molest the second rope better, but hey. I’m not judging anyone!

Angelina made a beeline towards Madison as soon as she got in the ring, but Madison smartly put the official between herself and the challenger. She wasn’t exactly ready to defend just yet. Of course, Angelina didn’t care and attempted to attack Madison, and with the referee stuck in the middle the timekeeper showed some sympathy and rang the bell. Madison got the first definitive strike in on her opponent and Angelina went staggering back and to her knees. Madison followed it up but the offense was short lived as Angelina began throwing punches. She forced Madison back into the corner and tried to whip her across the ring, but Madison was able to reverse it and Angelina slammed her back into the turnbuckles. Madison charged at Angelina with full speed but the numerous times ex-champion got her foot up and rooted Madison right in the mouth. Madison went flying back, but caught herself, and went right back at Angelina. Angelina was able to kick both feet up this time but Madison was ready, threw them between the ropes, and yanked Angelina down to her back by her hair.

Pleased with herself, Madison appeared to be going for a cover, but instead she decided to mount Angelina and start slamming her head into the mat. The referee screamed at her to stop and Madison verbally abused him. She finally went for the cover, but Angelina was up at the one count like Madison’s flurry of offense didn’t even effect her. Madison looked understandably annoyed by this and she brought Angelina up to her feet by using a front facelock. Angelina attempted to fight out of the hold, but Madison kneed her in the gut a few times before bringing her down with a fancy pancy little swinging neckbreaker. Madison got to her feet and stepped her feet in front of Angelina’s shoulders. That led into her porn movie-esque move which probably made a lot of weirdos happy. Madison went for a cover when all was said and done, but again Angelina got the shoulder up. This time it was after the count of two. Irritated, Madison went for another one. The end result was the same. Madison decided to take her anger out on the referee and she not so politely told him she should have had a three count. Needless to say, he assured that she was oh so wrong.

Angelina started to stir, so Madison turned around and got her head back into the match. Angelina hit Madison with a modified jawbreaker that sent the champ backwards. Madison, who was clearly groggy, tried to strike back but Angelina took her down not once, but thrice by the hair. The third time, Madison was slow to get back to her feet but once she did, she was knocked right back with a vicious flying clothesline. Angelina went to the corner and waited on Madison to get up, and once she did, Angelina was ready with a martial arts style kick. It connected right to Madison’s face and Angelina seemed to be in firm control.

Low and behold here comes Mystery Woman. Angelina turned her attention from the match, to the bike, and Mystery Woman began to rev the engine. Eventually she got off the motorcycle and headed for the ring. The referee tried to send her out of the Impact Zone and Angelina invited her to get in the ring. However, it was Velvet Sky who came out of nowhere and destroyed Mystery Woman with a chair shot to the back. Velvet started ripping into Mystery Woman and berating her into absolute nothingness. Madison got out of the ring and got the championship, then re-entered and hit Angelina with the title. She tossed it away and went for the cover, but Angelina used her super human strength to kick out.

Meanwhile, Velvet ripped the helmet off Mystery Woman’s head only to reveal a mask. Womp womp.

Mass confusion reigned supreme. Mystery Woman tossed Velvet aside and got the heck out of dodge. Madison ripped Thomas a new asshole. Angelina called on Zordon and Alpha Five, morphed into John Cena, and hit Madison with her finisher. A new Knockouts Champion was crowned. Velvet held the helmet up in victory and silently saluted her former best friend and tag team partner.

I wish I could say all this was interesting, but it really wasn’t to me. For what it’s worth, I’m not going to sit here and follow the usual format. I don’t want to get into the good, the bad, and the ugly. I simply want to talk about what we watched tonight. A lot of people have been asking if Angelina’s last reign counted. I feel like it did because years ago when Melina first won the Women’s Championship, she lost it in a house show match to Mickie James in Paris. Whether she lost it because of a mistake or whatever, I don’t know and frankly, I don’t care. Details are not important to the point I’m trying to make. During that same show, Melina won her championship back and officially became a two-time Women’s Champion. She had to lose it in order to win it back, and technically, Angelina did win her last title match against Madison. In my opinion, the reign counted and I’ve heard Taz say it as well, so there ya go.

There’s no doubt in my mind that TNA is trying to create their own “Trish” out of Angelina. Bullshit similarities aside, you can’t ignore what’s going on. Angelina is champion once again, and it’s a shame because there was a perfect storyline going on between Velvet and Madison. You can criticize Velvet’s in-ring talent all you want, but lesser girls have held championships before and at least Velvet can bring a hell of a character to the table. It would have been an amazing pay-off to see Madison and Velvet feud, securing the Beautiful People break-up for good, and have Velvet finally take the title off Madison. There’s no reason to give Angelina the championship again except to bump her reign numbers up. What exactly is she bringing to the table? She’s a great wrestler, but her character is no different from some of the other Knockouts. We’ve firmly established that TNA only pushes Beautiful People and Tara, in addition to Angelina, so I guess this is going to lead to a feud between Angelina and Tara, with Velvet and Madison thrown into the mix.

There’s no speculating that Mystery Woman isn’t Tara. She clearly is. Everyone is going to think what they want to think regardless, but come on. The seeds have been planted perfectly for Angelina versus Tara version 9,570,828. TNA is once again going with the old (Ang/Tara) instead of with the fresh and new (Madison/Vel) and it’s a real shame. Even if Velvet didn’t take the title from Madison, it would have been nice to see someone different in the championship hunt rather than the same ole, same ole.

I wish I could give Impact two thumbs up but frankly, I’m just not excited. The match itself was fine. I’ve said several times that these ladies always work nicely together. Tonight was no exception. I just don’t care about what happened and I’m certainly not excited about what’s to come in the next few weeks.

But hey, it’s only my opinion.