Impact Write-Up (December 1st, 2011): Street Fighting and Car Washing… What More Could We Ask For?! 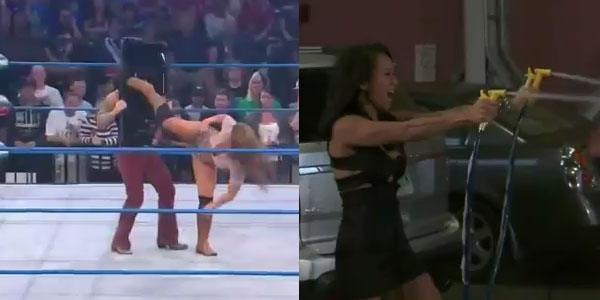 What’s up all my loyal ho-ho-hos?! I’m very thankful (you know, since that’s the actual holiday we just celebrated) that you’ve all managed to continue on our journey into Thursday night dominance after the much controversial Lingerie Bowl, and now we have a bikini car wash, but that will come later.

This week, the greatest woman in the world, Miss Karen (along with Gail Kim & Aunt Traci by her side), orchestrated a Knockouts bikini car wash featuring Velvet Sky, Brooke Tessmacher, Tara, Winter, Angelina Love, and Madison Rayne as punishment for their actions last week. On top of that, we got a knock-down, drag-out, street fight between ODB and Mickie James, which is sure to be epic considering those involved.

Now let’s get into the greatness that is bikini car washes and street fights! BAMMMMMMM!~

Before I begin, let me say that these segments aired throughout the show but since one of them leads into the street fight, we’re going to switch things up and recap them all first.

Segment 1: We head backstage to see Winter, Angelina Love, Velvet Sky, Brooke Tessmacher, and Tara standing in front of some cars dressed in their finest robes. Speaking on behalf of myself, I can vouch that it was freezing in this area, so I feel for them having to stand out there in that weather. Suddenly, the voice of an angel graces my eardrums, as out belts “QUIT YOUR WHINING!” from the brilliance that is Miss Karen. She informs the ladies that since last week, they disappointed in the Thanksgiving Thong Throwdown, she is going to punish them by forcing them to wash cars in their bikinis!

She reiterates that they will wash every inch of these cars by getting down on their hands and knees to scrub the rims and the tires, which Velvet should have no problem doing. Miss Karen tells them that she has a few phone calls to make, but that when she returns, they better have their robes of and they BETTER BE SCRUBBIN’ THEM CARS. Karen and Gail then take their exit, as Madison Rayne steps forward and declares that the true knockout of this division will show them how it’s done. Rayne then removes her robe to reveal her bikini, as she orders for them all to obey Miss Karen’s orders and disrobe! Some phrases used, I believe, include “OFF! OFF WITH IT! DROP IT!” and my personal favorite, “LISTEN TO MISS KAREN!” Ahh Madison, you did reign over the division so long for a reason… beauty, skills, and intellect as well.

Segment 2: We return to the bikini car wash, as Madison Rayne is screaming at Winter, Velvet, Tessmacher, and Angelina to scrub harder. Velvet (laughingly to me) screams for Madison to HUSH HER MOUTH! The camera then turns to Gail Kim and Tara, as Tara tells her how disappointed she is in Gail for allowing this. Gail says that if she had the body Tara did… at her age… she would be flaunting it to everyone that would look. She tells Tara to take the robe off and get to washing, which Tara seemingly agrees with and removes the robe. (Sidenote: Tara really does look insanely good.)

Miss Karen returns!!!!! She informs them how proud she is of them, before ODB walks up with her luggage and bumps into Miss Karen since she’s been looking for her. Miss Karen says that she has a surprise for ODB, and it’s a street fight against Mickie James! The deal for this bout is that if ODB can hurt Mickie in the ring tonight, she will become the new number one contender for the Knockouts Title. ODB seems pleased as she heads off, and Miss Karen screams for the bikini clad ladies to get back to work!

Segment 3: We come back once again to see all six of the ladies arguing with one another. Velvet is trying to outdo Kelly Kelly‘s “COME ON, AJ” record by screaming “JUST STOP” over and over at Madison, while Angelina and Tara start to argue with one another. Tara tells Angelina that she missed a spot, before whacking her upside the head with a sponge! Love retaliates by throwing her sponge right in Tara’s face, as all hell breaks loose (including Brooke whacking Winter on the butt with her sponge multiple times). Some of the males come in to the scene, before Gail Kim takes it upon herself to spray them all with a giant hose like a true champion should!

We now head to the arena, where Christy Hemme announces the following match is a street fight, and ODB makes her way out to the ring. Once inside, HARRRDDCORRREEE COUNNNTRYYYY plays for all of a few seconds, before Mickie is attacked on the ramp by her dirty-dirty opponent. ODB begins to beat Mickie down, before tossing her on the ramp and screaming “COME ON HARDCORE COUNTRY!” The two roll down the rest of the stage, as ODB slams Mickies head into the ring apron and they slide into the ring.

Mickie with some punches to the face, followed up with kicks before ODB backs her off. She goes for a Lou Thesz Press, but ODB holds on and throws her into the corner. ODB runs forward and goes for a splash, but Mickie dodges out of the way and sweeps ODB outside the ring. She covers for a one count, as ODB kicks out. Mickie goes to send ODB into the steps, but ODB reverses and throws back first into the unforgiving steel. She then proceeds to choke her on the guardrail, before Mickie counters and goes for a Mick-A-Rana! Set up is complete, but ODB counters mid move into a vicious powerbomb for a two count.

The two then make their way through the crowd, with Mickie throwing ODB into the stage! Backstage they go, as ODB tries to crawl away from Mickie. James picks her up, but ODB counters with a knee and slams a trash can lid into her back! She then grabs the actual trashcan and smacks it over Mickie’s head with a cover for a two count. Mickie grabs a cookie sheet, but ODB also has one and they exchange blows as if they were light sabers. ODB continues to drag Mickie around the arena and slams her into a wall! A chops to the chest area follows, as ODB screams for the ref to kiss her ass while Mickie manages to break out of ODB’s hold and hit her with a broomstick!

They head back into the arena and exchange strikes along the way before ODB throws Mickie back into the ring and climbs in with a steel chair. As she goes for the chair, Mickie catches her in a bridge pin for a two count. Some punches follow until ODB counters and tosses James into the ropes. MJ comes back with some clotheslines, and a dropkick that should make her momma proud. ODB tries to slap the haziness out of herself, while Mickie sets up for a DDT that ODB smartly counters into a fallaway slam into a kip up. (She makes that look so easy, but it’s not.) ODB grabs the chair and tries to hit Mickie, but James moves out of the way and hits a Mick Kick which knocks the chair into ODB’s face! Hook of the leg gets Mickie the One… two… three! Mickie celebrates, as ODB tries to question if this all just happened, or she was dreaming after a night on the town with her finest flask.

Thoughts: Innnnnnteresting night for the Knockouts. The backstage segments were pretty funny, and overall I enjoyed them. Controversy might stem from it, but if I’m entertained (and trust me it’s pretty easy to do that), then it’s good for me. I thought Madison was hysterical and plays that role so well. The Tara/Gail exchange was nice to see because I think it’s good to give Gail segments every week with people saying how disappointed they are in her actions etc. Tara and Angelina smacking each other in the face with their sponges might be my personal highlight because it was so random, yet brilliant all at the same time.

I thought the street fight was awesome as well. Those are typically my favorite match stipulation because you can literally go anywhere and grab whatever you see. I loved it when Mickie and Tara did it, and I thought it was again, very great tonight as well. ODB and Mickie heading all over the place makes for some entertainment, especially with ODB slapping herself and yelling “BAMMMMMM” or “Kiss my ass” to the referee. It made Mickie look great heading into the pay per view, and I’m pretty amped to see how Mickie and Gail do on the big show.