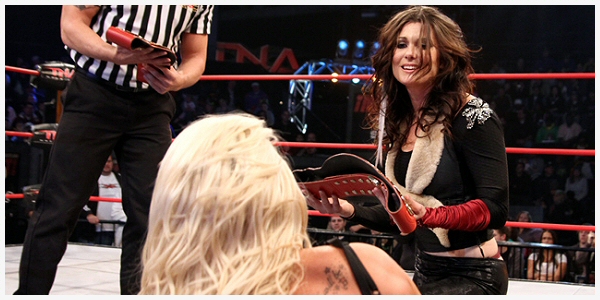 Back for the TNA Impact Weekly Wailing, I see. I knew you would return. That’s right, folks! It is time for yet another edition for the Diva Dirt TNA Impact Write-Up brought to you by yours truly.  Last week, we saw two Knockouts handcuffed together and a fairly new Knockout make her official in-ring debut. This week, we head into the final round of the TNA Knockouts Tag Team Title tournament to find out who will finally take home those nice shiny objects of obsession. So take a little ride with me on the TNA fast track. I might even let you be the caboose!

Our first sight of the lovely TNA Knockouts comes from the trailer (literally) of the Knockouts Champion, Madison Rayne and her tag team parter, Tara. They’re caught on camera, primping and prepping for their tag match later in the evening against The Beautiful People. Madison says they might be going into the match with one body but those two share one brain. Tara reminds her that her elbow brace is tough as nails but she also wants to make sure it doesn’t make her look…fat?! How on earth can an elbow brace make you look fat? I shake my head. Tara wants to make it quick so she can skip off to her party with Gen Me. They giggle, gaggle and go back to the art of applying lipgloss.

We see the back of, who we later find out is Sarita, with a gold strap behind her back. She enters the locker room of Velvet Sky and after a sneer, closes the door behind her. As shown after the commercial, during the break, Sarita proceeded to beat the living hell out of poor Vel Vel. She slashes her back with that leather weapon of choice, prompting Velvet to tag Sarita as a “crazy bitch”. Like we didn’t already know? This quickly goes into a rabid choke and after a moment, the Loco Latina sends Velvet careening out into the hallway.

Sarita once again taunts Velvet about not being able to face her one on one. At this particular point, I find myself wondering, why in the hell are these two still feuding?! Okay. I know this is probably going to link back to not wanting to see feuds but it is BORING. It’s like a very violent edition of Mean Girls minus Lindsay Lohan and her cocaine addiction.

Nonetheless, the fighting continues backstage, apparently in another trailer by the looks of it. I’m guessing there was a sale? Velvet comes off the floor strong, fighting back against Sarita and bringing her down with a choke of her own. They roll around on the floor but Sarita has the advantage with that belt. Can I just add right here that Sarita actually looks pretty fierce in that outfit? Good. Velvet struggles to breathe and does her best to keep Sarita away from her but she is relentless. She is bound and determined to crush Velvet’s throat. Thankfully, Angelina Love runs in for the save. Sarita wastes no time making like Speedy Gonzalez and getting the hell out of Dodge. This leaves Velvet on the floor, choking and telling her partner that she can’t breathe. Just a slight newsflash, as someone pointed out, normally if you can’t breathe then you can’t talk. Haha. =X Just saying.

The match we have all been waiting for is up next. You know you were waiting! It is the final round of the TNA Knockouts Tag Team Title Tournament. Tara and Madison Rayne taking on The Beautiful People to determine who will take home those coveted red and gold belts. TaRayne is out first and apparently Madison didn’t get a bonus check with that Knockouts title. She’s still recycling that hideous black attire and gold underoos but her hair looks nice. Out next is Angelina Love, walking stag due to the violent beatdown on Velvet earlier in the night. TaRayne gets a kick out of it and giggles at her expense. I am loving Angelina’s outfit, especially the top. Bow chicka wow wow.

In what looks like a solo flight, the referee rings the bell with TaRayne on one side of the ring and Angelina on the other. Madison starts off for her team, making good to point out their two on one advantage. The two Knockouts lock knuckles and Angelina goes for a quick roll-up but it’s no good. Tara takes a step into the ring but backs out, allowing Madison to come back. “Hurry up, Madison. I’ve got a date tonight.” Really, Tara? Really?!? Are Gen Me even legal yet?

Despite the pressure, Angelina isn’t one to back down from a fight. She puts it to Madison but Tara’s random interference knocks her off track. Madison takes Angelina down with a choke (deja vu?) and goes for a quick pin but no three count. Unfortunately, the Canadian favorite doesn’t come as strong and it seems like the numbers game is starting to catch up to her. Madison presses Angelina back into the corner, applying a nice foot to throat choke. A tag into Tara and the Black Widow is in for a double team. Tara’s ring time is quick, only shoving Angelina across the ring before tagging her partner back in. She seems to be playing favor to that elbow of obesity. Madison wastes no time going for another pair of pin attempts but Angelina is not spent yet.

Going back to the corner, Madison tags Tara in for another short stint before coming back in herself. She goes for an illegal hair pull before executing the headscissors stomp (as Mike Tenay so kindly pointed out) that she is so fond of. The look of glee on her face kind of makes you wonder what exactly she gets out of that. Hmm… Lazy pin..one..two..and a half. Angelina kicks out and gets tossed back into the corner for her efforts. But she won’t be held down!  She fights back, giving Madison a kick then a back elbow. Her legs swing around and she’s sitting on the middle rope when SMACK!; elbow brace to the face. Angelina’s body dumps to the mat while Madison keeps the referee distracted. This isn’t looking good for A. Love.

But wait! Out on the ramp is Winter! She makes her way to the ring, a scowl dark across her face. Can we say fierce as hell?! I think I have a new favorite. Madison is baffled by her presence, especially when she slides into Angelina’s corner and stretches her arm out for a tag. She gets it quick and storms into the ring, going right for Madison with a big boot. She pummels Madison like a wild puma and when Tara tries to interfere, gives her a swift kick to the mother land. It doesn’t just hurt for the guys, people!

Madison tries to come at Winter again but TNA’s newest Knockout isn’t going to stand for it. She wrenches Madison’s arm and picks her up for a harsh sidewalk slam which lands Madison sloppy on the mat. Three seconds later and we have new TNA Knockouts Tag Team Champions: Winter and Angelina Love!

Without even an ounce of celebration, Winter rushes to Angelina’s side to check on her. And yes, that was Tara blowing on her uterus that you just saw. Someone pass her a Midol. I don’t think that party is going to go so well now. After realizing where she was, Angelina quickly backs away from Winter, shocked. The referee confirms they are the new tag team champions as Winter offers her one of the gold belts. Angelina questions if it is for her. Talk about a Merry Christmas. A. Love is still shocked, slightly creeped out by Winter’s appearance. TaRayne are both perplexed as they leave the ring and the winners’ hands are raised in victory.

Thoughts: I am so ecstatic to see Katie Lea (Winter) back on wrestling television. She has been a favorite of mine for years on end and I smiled like a kid when I saw her come out. Yes, we have gotten her in random backstage segments lately but seeing her in the ring again gave me chills. I like the twist that TNA went with in regards to the titles. It is always nice to see a change up, which I normally encourage. I am very, very curious to see where Winter and Angelina Love go as the tag team champions and as a tag team.

I think it would have been more entertaining if, for the Christmas Impact edition, they had wrestled in hot Santa attire but oh well. Winter looked fierce, as I know some of you would agree. As for Velvet Sky, I’m not sure where this is going to leave her. I know she will probably continue this feud with Sarita and who knows? Maybe somewhere down the line, she’ll get her shot at the Knockouts Championship. Now THAT would definitely be changing it up.

I want to wish all of you a very Happy Holidays, whichever you celebrate. I hope you all get mounds of presents and eat gobbles of good food. Spend it with family and friends and cherish what you have. I thank you very much for giving myself and Diva Dirt some of your precious time on Christmas Eve. Until next week, may you all be blessed with goodies and gumdrops under the mistletoe. Christmas kisses!