Impact Write-Up (January 19th, 2012): Mickie & Madison Square Off in a Cage, Angelina Lets Out Her Rage 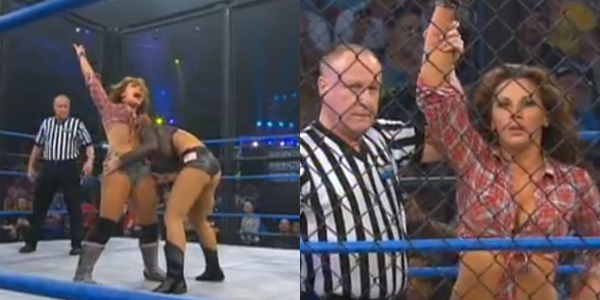 Welcome all you benevolent skanks. This is, of course, your weekly Impact Write-Up, and I can think of no better way to begin tonight’s festivities than with that top notch greeting. Tonight, from what I saw on Twitter last night, we have a pretty Knockout filled show, however, I have stopped viewing as it airs on television to protest the firing of Miss Karen! Okay, that’s a little exaggerated, but thanks to a certain website being shut down yesterday I have lost much of how I view other programming so I chose to watch that instead. What does that matter you ask? Well, I don’t know what happened so you shall be getting my live reactions to it. I do know that Mickie James and Madison Rayne shall be squaring off inside a steel cage, and that, ladies and gents, is enough to get me excited. Let’s begin!

First up, we head backstage to see an unidentified male voice asking Angelina Love how she feels about Creepo Beard getting a little too personal with her last week. She claims that she feels dirty and disgusting after he put his grubby paws on her, before challenging him to a match tonight! She tells him to come alone, being she doesn’t need to see his boyfriend ODB, as she then heads out to get ready for this supposed Intergender match coming up.

Up next in this Knockout saga, we spot Creepo Beard standing in front of a Bellator Fighting Championship truck. He spots a woman and claims he won’t fight girls, before using her spoon to practice his shots. (So I guess female cooking utensils aren’t part of the “won’t fight girls” deal?!) The woman tries to politely inform him that she’s not a part of this and that Bellator Fighting Championship is just an ad on a truck, but clearly his beard is distracting him to process what she says. The annoyed caterer walks off, before ODB walks into the equation and pumps him up about his match later, whilst criticizing Angelina’s weight. He informs her that he does not want to go through with it because he doesn’t want to fight women, but she says Angelina challenged him and to stop hiding behind his mother’s skirt. She ends it by saying if Creepo does a number on Angelina in their match, ODB may do a number on him later tonight!~

(Skip to 10:54 in the same video.) Following a video package hyping up the Mickie/Madison cage match tonight, we spot Madison Rayne freaking out to Gail Kim backstage about it. She claims that people don’t belong in cages, but animals do! Following a magnificent Miss Karen shout out, Gail snaps at her to calm it down. She informs Madison that she will be there for her like Madison always is for her. They then head out to the ring to get ready.

We return from a commercial break to see Hardcore Country herself, Mickie James skipping out to the ring in her sharpest plaid gear. She enters inside the cage and poses for her fans, until SHE’S A KILLLLLLERRRR QUEEEEEEEEEEEENNNNNN blares across my computer speakers and both Madison & Gail walk out to the ring. Gail is pretty much having to drag her partner out, as Madison looks like a timid mouse right about now. Rayne officially enters inside the cage, but the referee sends Gail away. She does something interesting though, and makes a phone call symbol that she’ll be back and it’ll be fine. Could she… could she… could she be calling Miss Karen?! As my eyes nearly begin to cry tears of joy at what may happen, the cage door shuts and the bell sounds which can not mean good things for one, Madison Rayne.

Mickie shoves her back from behind and begins with a nice clothesline. From there, she begins to pound Madison’s face into the turnbuckle, but Rayne starts to take control and scales the cage… until Mickie hits an AWESOME sit-out powerbomb. James takes the fight to Madison in the corner, before connecting with a snapmare into a baseball slide dropkick for a two count. Another pin only gets a second two count, which sparks Mickie to apply a chokehold submission. The crowd begins to clap, but I don’t think it’s in the usual way where they strive for the person to break the submission. Madison gets to her feet and goes for an Irish Whip, but Madison DRILLS her in the face with a brutal sick boot. She goes for an Irish whip, but Mickie reverses it and sends her into the corner as we head to a commercial break.

Upon what I believe is our return since these videos I’m watching are beyond confusing, we see Mickie kicking Madison Rayne in the corner, before Madison breaks it off and starts to scale the cage. She elbows Mickie away, but as she charges forward, Mickie nails her with the flapjack kip up! James starts to head to the top rope, but Madison stops her and executes a neckbreaker off the top rope that also slams Mickie’s head into the cage. She then begins to rake Mickie’s face across the steel! Rayne with a snap Suplex, as she keeps the hold locked in and drops her with a neckbreaker. The crowd tries to get behind Mickie, as Madison remains in control with a face lock. She just decimates Mickie with a hair slam, before hitting her repeated face slam headscissors stomp onto the mat. A hook of the leg gets a two count, as Madison takes it back to the rest hold. Mickie finally starts to fight out, but Madison remains in control with a running hip toss into a facebuster.

Rayne sends James into the corner and connects with another hip toss, but as she charges off the ropes, Mickie counters a clothesline into an arm trap neckbreaker! The referee begins to count them down, as both women struggle to a vertical base. Madison and Mickie exchange hair slams into the canvas as neither stands in control yet. Mickie finally counters a blow and begins to mount a comeback with some flying forearms! She goes for another flapjack, but Madison escapes and hits a kick to the face. Madison argues with a referee about a count following a near fall, as she goes to toss Mickie into the cage, only Mickie counters and sends Rayne into both sides! She then drills her with the Mickie-DT and scores the victory! Mickie celebrates her huge win as Hardcore Country remains undefeated in cage matches (to my knowledge at least).

Backstage, Mickie can be seen with Tara and Velvet Sky as they celebrate James putting Madison in her place. The unidentified male asks Mickie how she feels after the match, as Mickie says she’s ecstatic… but that she still has one more person to get through, and that’s Gail Kim. James adds that the title is coming home to Hardcore Country land, which seems to take Tara and Velvet off guard, as both of them say they want the title as well. Mickie continues on about how Gail ditched Madison even though Madison is always there for her, before the focus goes towards something with her leg that she says is an injury from a prior match against Gail. The three then head out to celebrate with champagne as this segment draws to a close.

(Skip to 11:56 in same video.) Also backstage, we spot ODB drinking from her flask as this unidentified male asks her what she wants Creepo Beard to do tonight to Angelina. ODB tells him that he wants Creepo to rip her in half and take her out… but Winter attacks her out of nowhere from behind! The two brawl around the photoshoot area, before Winter can take control with what I think is a lead pipe. She then removes her belt and starts whipping ODB in the stomach with it! She demands to know where ODB’s boyfriend’s at now, as she chokes the One Dirty Bitch out and heads off.

As I get ready to ice my hands in water from all of these segments, Angelina Love and Winter make their way out to the ring, which gives me enough reason to hold off on the phalange treatment. They pose on the ropes, and out comes her opponent… which makes me want to just go ice my hands now, Creepo Beard. He slaps hands with the fans and climbs into the ring after some spastic posing. He locks up with the referee and does a cartwheel, before asking for a time out against Angelina. Love taunts him, as he backs up from her and he locks up with the referee again. From there, he rolls outside the ring and does one of the most awkward lock ups with a fans I’ve ever seen.

He slides inside the ring and back out, as he goes after Winter and finally hops into action. He tries to shake her hand, as she screeches for him to fight her, before he goes after the referee again and punches him slowly. Angelina thankfully kicks him in the groin to end this in a disqualification, as both females beat him down until ODB runs out and spears Winter to the ground. The start to go for her as Winter removes her belt and goes for it again, but Creepo Beard tosses both of them out of the ring. He helps ODB up and the two proceed to kiss inside the ring much to Winter and Angelina’s chagrin.

Thoughts: So when I heard this was a Knockout filled night, I think that was even an understatement. I feel like I just recapped the entire show! Starting off with the cage match, I thought it was pretty awesome. I loved Mickie’s sit out powerbomb, and especially that they got so much time to go out there and actually deliver inside the cage when it’s not the main event. I think it speaks volumes that TNA is giving their females this much air time in one night, complete with about a billion backstage segments to boot. I’m glad they are finally finding places for Winter, Angelina, and Velvet Sky as well, and that fight backstage between Winter and ODB was brutal! I like seeing the two of them feud because it takes me back to their OVW days and I enjoyed that feud a lot, so here’s to hoping it continues (maybe with slightly less Creepo Beard… that’s all I’m going to say).