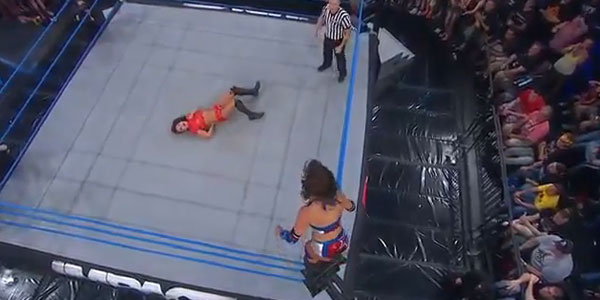 Why, hello there, everyone, and welcome to your trusted weekly dose of Impact Wrestling. Let me be the bearer of bad news for you all… I will NOT be recapping Claire this week (as much as it pains me). Never fear, it’s not because I hate her or anything. She’s still so much of a mess that I kind of enjoy watching her. The only problem is I can only find two parts of last night’s Impact online… and Claire’s segments spread throughout the show, thus no luck. So instead, I will just let you know that our friend, Claire, announced that AJ Styles was indeed her baby daddy, and also got angry at some camera men for invading her personal space. YouTube it (when available) if you’re in a dire need for Claire like I am weekly!

Alright, now onto tonight’s Knockout action. We had the big highly promoted championship rematch between reigning champion, Miss Tessmacher and challenger, Gail Kim. To make things a better place (for me), Brooke Hogan and her hoe-down of a theme also grace our presence, for she will be providing commentary on the match.

And if that’s not enough to entice your viewing pleasure, we also get a brief segment with Madison Rayne discussing why she developed feelings for Earl Hebner. Yes… you read that right. (Also, chalk this up to sentences I never imagined I’d type.)

Let’s get right into this pronto!

We are taken to a brief video recap of Madison’s big reveal last week when she jumped into the brittle arms of Earl Hebner and proceeded to lay one in on him in a way I could see Cryssi and Kahl Christian/Lord Dolph if they gave their consent. After some technical difficulties, we head to a video interview recorded after the segment last week… and it wouldn’t be an Impact segment without some dramatic music! She calls Earl an icon, asking if it’s not common nowadays for a younger woman to fall for an older man. Plus, they share so many interests, like wrestling and keeping their bodies in top condition. Madison refuses to defend herself to anybody… and with that, we head to the ring!

Here comes our Knockouts Executive, Brooke Hogan and her country theme that may be one of the only songs not featuring Serg Salinas in this company. A Knockouts Title logo flashes on the screen, proceeded by our weekly pan up shot of Christy Hemme that Taz must hold in his excitement for with the KO Executive nearby. Kim ascends to the ring, before her wonderful lyriced theme cuts off by the equally wonderful one of our champion, Brooke… I mean, Miss Tessmacher. (God, why couldn’t Brooke Hogan just become Miss Hogan?) Tessmacher hops into the ring as Gail attempts to ambush her from behind. Thankfully, Tessmacher sees this coming and ducks out of the way.

The champ goes to work with some kicks and a big set of clotheslines. A dropkick into the corner, before scoring with a nice running hurricanrana. She grabs Gail by the hair, but Kim screams out loud and drops her shoulder across the top rope. Gail continues to work over the arm, as Brooke Hogan states she has seen a lot of weave pulling! With that, she announces Miss Tessmacher will be a guest on Spike’s Comic Con All Access tomorrow (actually today) at 4 PM! Kim hits an arm lock back suplex, before dropping the injured body part across her knee and keeping the pressure on.

Gail applies a Cattle Mutilation to Tessmacher! She locks it in for a few, before Brooke counters into a quick pin attempt. This brief comeback doesn’t last long though, as Gail continues the fight. Finally, Tessmacher manages to score with a flurry of clotheslines! She follows it up with the corner facebuster and hits her new neckbreaker finisher… but Gail grabs onto the ropes for dear life and stops the count. Kim with a roll up, but only a two count. She then looks to go for a… oh my, a top rope Eat Defeat! Tessmacher stays hooked on the top rope as Gail falls to the canvas, allowing Brooke to nail an elbow drop for the win! Tessmacher celebrates her victory, as we wonder what’s next for both of these women.

Thoughts: I enjoyed this match from Brooke and Gail a lot. I’m not sure if it tops the first pay per view one they had (need to rewatch to see), but it was definitely much better than the match where Brooke won the title in terms of ring work. I loved Gail working over the arm, and Brooke having those sporadic glimmers of hope until the ultimate comeback at the end. It’s no secret that Gail shines in her ring work, and I honestly think she puts on the best matches against Brooke (well to be fair, Brooke has hardly faced anyone else in singles matches). Tessmacher changing her finisher up again works for me, mainly because I did not like the latest one she had chosen at all. It never seemed impactful, and unfortunately the Tess Shocker was hard for many to take other than Gail so she couldn’t use that. The elbow drop looked great tonight, and I would love for her to keep this on permanently.

Where do we go from here though? Gail is sort of in the “Beth Phoenix” stage where she’s had the title rematch to no avail after being that top woman for so long. I hope Brooke doesn’t flounder around like Layla is unfortunately doing in her reign as Divas Champion, but I think the difference between WWE and TNA is that unlike the Stamford company, TNA does number one contender matches well. They could easily throw one on next week and have someone (likely Mickie, Velvet, or even Tara) come out and become that next top challenger. I would love to see Tara and Brooke feud eventually, but I’m not sure if I’d like it to be this soon since I feel that could be done on build alone rather than by a contenders match. I would say go for Mickie James to be the upcoming challenger and maybe put Gail and Madison into the tag team division so Gail doesn’t begin floundering herself.

One has to wonder though, why even continue these Gut Check segments when neither Taeler Hendrix or the guy who won the very first one months ago (Alex Silva, I think?) haven’t even appeared on TV outside their victories. Not to mention, the countless number of Knockouts who never appear either that we seemingly mention weekly. There are ways to use these women, but TNA isn’t capitalizing on it for whatever reason and it’s really frustrating. I mentioned it a few weeks ago, but team up Tara and Taeler as the new veteran/rookie group with Tessmacher away, plus add in Sarita/Rosita and you’ve got some tag teams for those forgettable red belts. Winter… I just don’t know anymore. Without Angelina, there is no easy way to bring her back in unless she randomly becomes Tessmacher’s next challenger by winning a battle royal or something. Sigh, I just don’t understand why it’s so hard to use some of these people, or why they’re signing more when they can’t use what they have. (And this goes for men as well.) Instead of adding an hour to Impact that’s used to just recap what I’m sure anyone watching has already seen, they should’ve added Xplosion back on TV or something so that more talent could be used. Of course, it could’ve been up to Spike on what the show was, but I would think more people would rather see something like Xplosion than an hour long show recapping stuff from the week before.