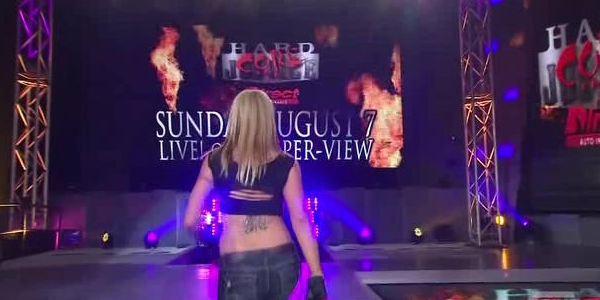 Hello, my darlings. After the disaster that was last week, I’m pretty sure that we now have everything back on track. I say we, but I mean me. However, you are like my family. And I just sang that out loud in a very campy, Barney-esque way. Anyhoo! Last week, we saw a Knockouts Championship match that never was and the return of yet another Knockout, but this time it was the ultimate original. We also crowned new Knockouts Tag Team Champions last week in major booty poppin’ fashion. This week, one-half of the new champs is taking on the evil villian of Impact Wrestling and we have a confrontation of flamboyant proportions. Throw in a little crazy and it is your ever typical week in the Impact Zone. So I hope you brought your Kool-Aid. You’re gonna need it.

We start things off this week with the only Knockouts match of the evening. The the ring first, Winter makes her way out with her lady in waiting, Angelina Love. The Mistress Morticia is taking on one-half of the new Knockouts Tag Team Champions, Tara. However, the veteran femme fatale doesn’t come to the ring alone. She brings her new partner-in-crime with her and staying true to herself, makes out with her on the apron. She will go to her grave with that one. Aside from that action, senior official Earl Hebner isn’t about to deal with any shenanigans and he immediately kicks Angelina and Miss Tessmacher to the back. This is going to be a true singles match, if he has it his way.

Tara, taking the iniative to start the match, dodges a behind attack from Winter and immediately turns on the hurt. Handfuls of hair and facial slams into the turnbuckle that lead into a bridging pin attempt but it is a no-go. Winter turns the tides but not for long because Tara is back on with a tarantula submission around the ropes. But the referee has to count the break and when Tara stands back up on the apron, Winter drops her like a hot coal. It is time for that over-the-top rope leg drop but Winter rolls out, causing Tara to land right on her ass. Makes my booty hurt. Save your comments.

Winter smells blood now and stays on her opponent, despite a failed pin attempt of her own. A back surfboard type submission but Tara is too strong to hold. She comes back with elbow shots from that..apparatus on her arm. Thank you, Taz. A clubbing forearm to the back of the neck and Winter does her best to fight back. Knees to Winter and a sling into the corner but like a puma, Winter slides down and comes flying back. I’m sorry. Who said that Winter just can’t cut it in the ring anymore? Yeah. You were wrong. Deal with it. That harsh clothesline takes Tara down and there’s another pin attempt, no good.

Winter sticks to the pain with the forearm shots, keeping Tara grounded. That is, until she pulls Tara up for a rough backbreaker across the knee. So many pin attempts, so little time. Frustration is setting in and it shows with the choking and snarls at Hebner. But letting the aggravation boil is what gets you laid off guard and gives Tara the chance to fight back. She gains her wits and lays harsh lefts to the midsection of Morticia. A rebound into the ropes and a trio of takedowns leads to a bodyslam with a standing moonsault for exclamation. She could have it here but when she sets Winter up, she gets shoved back into the corner. Yeah. This match just keeps coming.

And so does Tara. She comes out of the corner and gets a big boot to her face for the effort. A little time for a deep breath and Winter goes back in, the exchange and Tara has the upperhand. However, for some reason, Hebner gets all dramatic and acts like Winter’s foot just connected with his face. Or maybe it did. Did it? Who knows. He’s old and senile these days. Either way, Tara’s attempt at dropping Winter with the Widow’s Peak is thwarted by a back mulekick to the va-jay-jay. We all know how Tara feels about those shots. They’re deadly. Deadly enough to do the job and Winter gathers just enough energy to spin Tara around, dropping her across the knee. A final pin attempt and Winter has won the match in all her fierce glory. But can she win going into Hardcore Justice against Mickie James? I guess we’ll find out.

Later in the show, we’re sitting pretty in the ring with the original Knockout, Traci Brooks and a current highlight of the division, Velvet Sky. Traci has taken to the microphone, inviting Jacqueline and ODB to the ring. She calls them “ladies” but from what I’ve seen, they are far from a couple of ladies. Regardless, a back door is mentioned and Traci drops the personal invitation which prompts them to walk down the ramp. Velvet looks unsure of the situation but Traci assures her everything is going to be okay, hug included. I love Traci. Seriously.

When the ruckus duo hit the ring, Traci lets them know that she didn’t want it to be like this. She didn’t want to be caught in the middle but watching what they did to poor Velvet, she had no other choice. She reminds everyone she was the original Knockout and if it wasn’t for her, none of these dames would have a job. She tells us that management asked her to step away so that the future faces could come in. Traci even goes on to remind ODB and Jackie that they, of all people, should know how this wrestling business is because she does. They should be thankful that Velvet didn’t press charges, adding more to (ODB’s) criminal records. Traci puts her foot down and tells them that it ends tonight. ODB, never one to back down, says that she’ll end it…right after she puts her foot up Velvet’s plastic barbie doll ass.

Cue the feisty run-in stopped by the new BFF.

I’m loving the outfits, let me just say. Always loved Traci’s wardrobe but I’m dying for Velvet’s boots. I can do without the OMGWTF shirt, however. ODB and Jackie, on the other hand, can just take their clothes to the nearest donation box. I’m not feeling it. Regardless of fashion, ODB tells Traci that she has her facts all screwed up. She and Jackie lost their jobs. well…they didn’t lose their jobs until Velvet started rubbing her little pooty tang on the ropes. Um…what?! Do you really have to do that with your hips? No. Please. Just stop. You’re going cross-eyed. Even the Hawaiian Tropicana Hooters Invitational doesn’t want to see you do that.

That’s right, folks. ODB is gonna make it happen. The HTHI will take place sometime in the near future. Right after she finishes whatever is in her flask.

ODB says that with HTHI coming in, that leaves no room for real ass kickin’ women like Jackie and herself. But Velvet has had enough because she takes the microphone from Traci and tells her she’s got it. She tells them that neither one of them know her or anything about her. She grew up in Hartford, Connecticut as the runt, the one picked on and pushed around. Even beaten all the way up through high school. Days she didn’t even want to get on the school bus and… this is turning into a Lifetime movie special. Someone call the network! We got a pitch! I love you, Velvet. I really do but what should have only been said once, has been dragged out like yesterday’s dirty laundry. Just… enough.

You’re no longer a victim. Play that violin, Jackie! Okay. We get it. You were bullied, grew up and now you’re no longer taking any shit from anyone. I’ve been there. Honestly, I have but I don’t play it out like a Gaga song on the radio. Coming to this company was the greatest day of your life, Velvet. You earned it. I agree with you. I’m glad you’re bouncing back. Just kick more ass and talk a little less about the past. Moving along… Velvet says that she knows this business is one of the toughest to survive. Jackie knows that because she’s definitely no rookie. She’s got a lot of notches in her proverbial wrestling belt.

But Velvet proves a rather good point. Why not showcase your skill and fight for your job again? Why not have some pride in what you do instead of throwing it down the drain, acting like a couple of thugs? She lets them know that they can do whatever they want, fight it out week after week but she will always be the last one standing. She will also be the only one who is actually employed. Haha. But the ball is in their court. As for Velvet, she is done being anyone’s punching bag! She is done! No more. Absolutely not. No more! No mas!

Oh. You mean, we’re not finished yet? I thought…okay. I understand. I suppose I could stick around and share this backstage snippet with you but I was really hoping to go for the dramatic exit. Le sigh. Anyway, so…there was this spot. It was before the Knockouts match with Madison Rayne and a sad excuse for The Joker. I’m not sure why he thinks he’s Joker but he’s really sad. Seriously, Sting….seek professional help. I really can’t even describe this video in words so I’m just going to let you watch it for yourself. Don’t blame me. You made me come back.

Thoughts: I don’t know who it was that said this week’s Knockouts match sucked but I have to disagree. Not all great matches have to last longer than ten minutes. No, it wasn’t one for the record books but it was consistent and you can tell they know what they’re doing. A good wrestler knows how to scout their opponent and predict the next move. I definitely enjoyed it. Tara and Winter are two favorites in the ring and they definitely worked one another out. Now, as for the whole Velvet/ODB/Jackie/Traci thing. I’m extremely happy to see Traci back but I’m afraid it isn’t going to be permanent. I wouldn’t mind watching her put a few girls in their place but her recent run-ins haven’t lasted very long. I guess we’ll find out in weeks to come so until that time next week, my lovies! xoxo