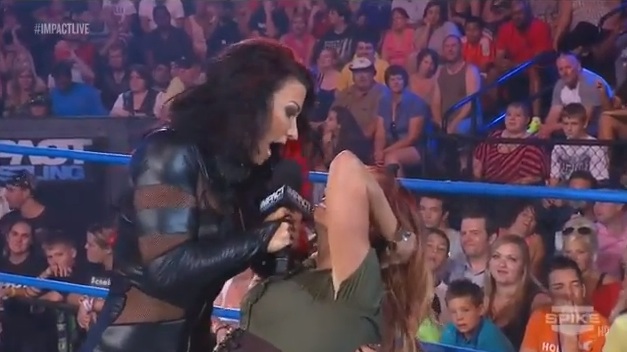 TNA turned up the dial on the bubbling feud between Tara and Brooke Tessmacher last night on Impact Wrestling, giving us a fantastic segment that saw the veteran Knockout snap — and poor, unsuspecting ring announcer, Christy Hemme, was there to witness it first hand.

The Knockouts continued to deliver the goods in a big way, so if you didn’t catch the broadcast last night (shame on you!), check it out below:

Following her attack on her BFF and student, Knockouts Champ Brooke, last week, Tara hits the ring to explain her change in attitude. She has come to the conclusion that the fans, and Brooke, have been using her to get TV time and the Knockouts Title, respectively. She further reveals that her new Hollywood boyfriend has made her see her worth and well, she’s done playing second fiddle to Tessmacher.

Not content with saying her piece, the veteran wants to make a physical statement too — natch, by calling out the retired ring announcer! (How very CM Punk!) Tara says that she wants respect (oh, this is getting eerie!) and demands Christy tell the audience her favorite Knockout. Despite the intimidation from Tara, Christy remains defiant (apparently she doesn’t remember that time Tara smashed her over the head with a glass jug) telling her that her favorite is Tessmacher. This only serves to rile up the once unstable Vicious Vixen who yanks her hair and demands her to name her favorite Knockout again, obviously hoping for a different answer.

Soon Tessmacher hits the ring and Tara flees. The pair stare each other down as all great wrestling opponents do, and we get a sense that a match-up is on the horizon.

Backstage, another Brooke, of the Hogan variety this time, is none too impressed with Tara’s actions, either. She gives the veteran a stern talking to before informing her that there will be consequences to her putting her hands on Hemme next week. Dun, dun, dun…

Thoughts: The past couple of weeks of Impact have been just perfect. At last, storylines! This is the kind of stuff we want to see on a weekly basis with the women. If you’re not watching TNA right now, you should be. I can only hope that they keep the momentum going into Bound for Glory. We’ve still got a few weeks to go, but based on what we’ve seen over the past couple of weeks, I’m hopeful that they’ll continue to amp things up and get us really excited for that eventual match. The problem with the Knockouts over the past several months has been the lack of real storylines, and now we have it. If they keep this amount of effort going, I don’t see why the Knockouts division can’t again reach the heights it once did.

As for the performances this week; some say Tara is getting old and should retire, but this week she proved that she’s still got it. She is still a compelling character who can bring it in the ring, in promos, and backstage segments. Tara gave one of the strongest promos we’ve seen from a Knockout or Diva in a long while. The intensity was just right and the hair-pulling and screaming towards Christy was perfect. Of course, the new heel Tara seems a little more subdued compared to the psychotic Victoria we all remember fondly, but I think it’s time to evolve and not just revert right back to that. I would love to see her evolve that psychotic character and update it for 2012.

Based on this week, and last week, I’m definitely high on TNA right now. Again, if you haven’t been watching, start tuning in weekly and support the Knockouts right now. Perhaps if more tuned in for the Knockouts segments right now while they’re good, the company will see that this is what we want on a regular basis.

What did you think of Impact this week? Tell us in the comments!