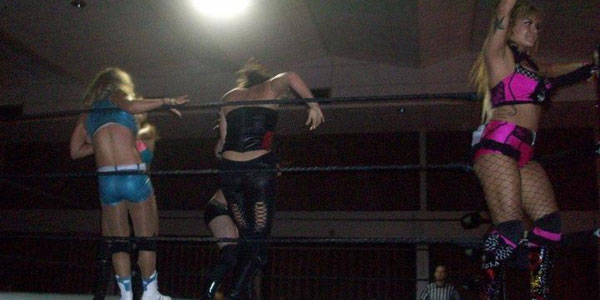 After recently reporting that she had relocated to Florida and begun training at FCW, former SHIMMER competitor, Tenille officially made her wrestling debut for the company Saturday night at a live event in Melbourne, Fl.

Tenille squared off against Audrey Marie, Natalie (Buggy Nova), Raquel Diaz and Paige in a five woman battle royal, which was ultimately won by Paige. Tenille and Audrey were eliminated simultaneously by Natalie after a good long while in what would put the televised female battle royals to shame with how lengthy this one went without an elimination. Natalie then seemed to join forces with Diaz against Paige until Raquel turned on her and threw her over as well.

Once down to just two, Diaz’s male “friend” for the night, Corey Graves (who she had managed earlier on in a match against Seth Rollins) came out to try and help get rid of Paige, but the British Diva shoved him off the apron and eliminated Raquel to win the match for herself. The two then attacked Paige after the bout had concluded, until Seth Rollins ran out to her aid and helped even the odds. With Diaz and Graves taken out, they then celebrated Paige’s win together in the ring.

Check out some pictures from the match below: