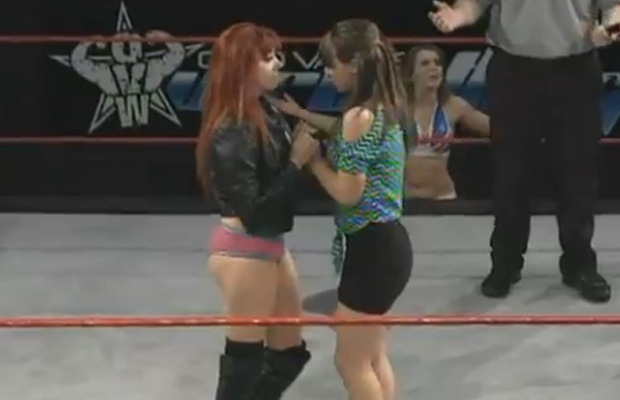 Ohio Valley Wrestling, based out of Louisville, Kentucky, has introduced quite an interesting (and well done in this reviewer’s opinion) romance storyline featuring two of its former Women’s Champions, Taeler Hendrix and Heidi Lovelace.

As we normally don’t cover OVW, we have decided to highlight this particular storyline due to its groundbreaking nature. Play catch-up with the story below and look out for more updates as it progresses.

After a few months of receiving gifts from a secret admirer, Taeler Hendrix was determined to find out just who had been sending them to her. As Dylan Bostic and Ryan Howe (of Tough Enough fame) brawled inside the ring, Hendrix came running out with a microphone in hand attempting to break the two up. She begs them to stop fighting over her, as both Dylan and Ryan accuse each other of being the admirer. Ryan takes a moment though, to insult Taeler and dub her a dime a dozen, which seems to upset her to the point of near tears as she pleads to know who sent the gifts if it wasn’t either of them. …Suddenly, out comes Heidi Lovelace to the ring! She takes the microphone from Taeler and lets out one simple phrase: “It was me.” Taeler looks on in shock and confusion, while Heidi heads to the back after revealing quite the bombshell.

Out comes Heidi Lovelace to presumably explain her actions from last week. She apologizes to Taeler for springing the reveal last week out of nowhere, but she got caught up in the moment of everyone fighting near her. Heidi is a little perplexed on just how to tell Taeler the way she really feels, but before she can attempt to continue on, Taeler’s music hits and out walks the fiery red head. Hendrix receives a microphone herself and completely understands why Heidi did what she did because every woman wants to be like Taeler and thus she tends to rub off on them.

From there, it seems that Hendrix believes Heidi is simply attempting to cover up for Ryan Howe so he isn’t considered a homewrecker for invading upon she and Dylan Bostic’s “IT couple” status. Heidi backtracks and tries to explain that Taeler isn’t really grasping what she means in that neither Dylan or Ryan care about her to begin with. In fact, the only reason Hendrix even got the presents to begin with is because Heidi cares about her! Lovelace just wants to know how Taeler feels in return, but Taeler is caught extremely off guard and simply walks off, leaving Heidi in the ring alone, and declaring she has a lot of thinking to do.

Heidi’s back out to the Davis arena once again, claiming she doesn’t want to seem pushy or in any way attempting to push Taeler away. She’s given her a week to think about how Taeler’s going to react to everything, now questioning whether or not she took the right approach to revealing her feelings for Hendrix. She’s cut off once again by the entrance music of Taeler, who gains help to get up the stairs and inside the ring. Hendrix gets a microphone and attempts to be fair with all the thinking she’s done over the past seven days. Before she can answer though, Taeler has a few questions herself for Heidi, such as first off wondering if everything is true in that Heidi is the true secret admirer as opposed to Dylan or Ryan. As soon as Heidi completely confirms everything to be correct, Taeler reveals she’s a little surprised at this — questioning if Heidi really wants to be the “lip” to her “gloss” so to speak.

Taeler contemplates her answer to Heidi, but before she can get it out she’s cut off by Dylan Bostic and his crown. Bostic takes the microphone from Taeler and reiterates to Taeler that he’s always felt completely fine with her bringing home female strippers (i.e. Heidi), much to their disgust. Dylan then tries to get a threesome going between them by walking away with both ladies, but Taeler manages to escape his grasp and decks him with a punch across the face! Heidi looks shocked, as Taeler starts screaming at Dylan. She tries to leave the ring, but Dylan grabs hold of her. Heidi looks to be about ready to kick some ass in defense of Taeler, but before she has to make that decision, out comes Ryan Howe who chases Bostic away!

Backstage we see all of the various OVW Divas gathered together in the locker room chatting, as Heidi Lovelace enters and they all turn to silence. Heidi simply wants to know if anyone has seen Taeler, but some (Nikki St. John and The Blossom Twins) seem to want nothing to do with her. Meanwhile, others (Epiphany and current Women’s Champion, Trina Thompson) accept the way Heidi feels regarding Taeler. She then walks off as the fellow Divas continue their talking and seem to show where their true colors lie.

Out walks Taeler Hendrix as she prepares for what looks to be some in ring competition, that of which only seems to be further cemented by the entrance of The Blossom Twins. Taeler and Holly stand in the ring as Hannah supports her sister from ringside and the bell sounds. Taeler piefaces Holly early on and drops her by the hair, but Holly fights back with a takedown for a one count. Taeler fights out, with both women running off the ropes and scoring with a double facebuster. Suddenly, Heidi Lovelace enters from the back pleading with Taeler to stop. She simply wants Hendrix’s answer right now, and couldn’t even resist waiting another moment for the match to finish. Taeler grabs the microphone from Heidi and hands it off to the referee, before grabbing her by the hands and walking off together as if to signify her acceptance of Lovelace’s invitation! The referee begins counting to ten, as Taeler loses her match against Holly via countout and the Blossoms semi-celebrate a win.

Taeler Hendrix recently gave a presumed partial in/partial out of character interview with The Greg DeMarco show in which she spoke on her love story with Heidi.

On if she thinks the storyline needs more notice: “Absolutely [the storyline should be getting more attention], girls don’t get enough exposure in this business. … I definitely think this should have more exposure because it’s relatable to lots of people. … Almost everything in professional wrestling has been done. … I’m an entertainer—I’ve always wanted to entertain people. I’ve always said I’m the Bette Davis of pro wrestling. … This is a storylines that takes the girls in Ohio Valley Wrestling to a different level. It gives us something to play with and explore.”

What do you think of the Taeler Hendrix/Heidi Lovelace storyline? Are you a fan of the way the company and women are portraying it?