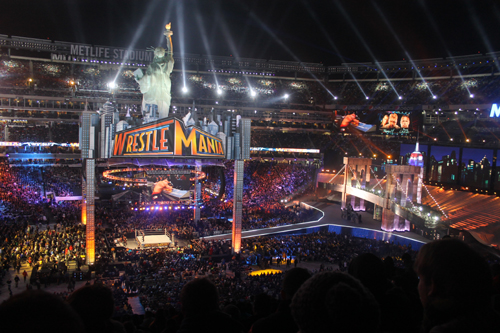 Hello Diva Dirt! Another WrestleMania has come and gone and we are literally looking on to what next year’s WrestleMania will bring (seriously, WWE aired about 20 videos promoting ‘Mania in New Orleans for the audience at this year’s show).

Once again, I had the pleasure of going to WrestleMania. This has become a tradition of sorts for my family and a very fun one at that. Every year I look forward to WrestleMania weekend. It’s the one time of the year I can just take a break and be a wrestling nerd without any scrutiny. My brothers and I are all very different individuals. I’m one of three. I’m obviously a loud extrovert who enjoys media and being creative. My older brother is more soft spoken and enjoys reviewing movies. My younger brother is a bit more quiet than both of us but extremely brilliant. The one thing we all have in common? Wrestling. Since we were children we have all been huge wrestling fans. All of us rooting for someone different but all of us being entertained by the wonder. My dad definitely loves it too as he’s the person who got us into wrestling in the first place.

For the last several years, we’ve been attending WrestleMania every year. It’s the thing that bonds us all together and reminds us we’re family. It’s that time that no matter how different we are we are all together and enjoying the same thing. WrestleMania to me is a lot more than just some show.

This year’s WrestleMania had an even more special feel for me. WWE’s cheesy “coming home” catchphrase actually applied to me. I grew up in New Jersey. My father is from Brooklyn. My mother is from Staten Island. The metropolitan area is in my blood. This WrestleMania would be at home. We didn’t take any special trip or spend the night in New York. We drove from our home to see the show. It was different, but it really did feel like home.

You can’t have WrestleMania weekend with just the show. There’s all different sorts of wrestling events taking place in the area. We decided to take full advantage of this.

On Saturday, I attended my first SHIMMER show. Actually, I watched my first SHIMMER show. I don’t really follow the independent scene. Between work and my social life I barely have time to keep up with the Divas and Knockouts as it is. I have to say I was extremely impressed. Amazing Kong made her SHIMMER return and looked incredible. It’s always been a dream of mine to see Kong compete in person and she didn’t disappoint. The rest of the matches were incredible. The wrestling is so different than what we see on WWE every (almost every) week. The audience ate up every second of it. If you have the chance to attend a SHIMMER show, do it.

After that experience on Saturday we returned to the Meadowlands for Axxess on Sunday afternoon. Usually, Axxess is held in a convention center but I believe the car show was booked at the usual convention center in the NY area. I have to say, having Axxess in an arena was a terrible idea on WWE’s part. The event was completely oversold with a line wrapping around the building. If you wanted to meet a Superstar, you basically had the chance to meet only one or two. In the past I’ve gone to Axxess and met up to nine people in one session. How it worked was you waited in a line, then you were taken into the actual arena and sat in a row. Then, rows were called one by one to meet the wrestlers. It took forever. I waited nearly two hours to meet Layla.

As long as the lines were, they were worth the wait. I met Alicia Fox for the third time and this was much different than the past. Alicia knew who I was from some of my columns on Diva Dirt and I was blown away. She immediately gave me a huge hug and chatted with me for a little bit about the website and thanked me and the team for all of the hard work we do. I never thought I would be receiving thanks from the Divas at this event. Isn’t this supposed to be the other way around? Alicia is an incredible person to meet. No matter who else is at any signing event try and meet her. She always takes the time to make it a memorable experience.

After Alicia, I hopped on Aksana‘s line. She was being very quiet with a lot of fans coming up so I wasn’t expecting much. Boy was I wrong. When I got up there and told her I was from Diva Dirt she also gave me a huge hug! She asked if I was saying nice things about her clothes in my articles. I hesitated for a second (because honestly, I wasn’t sure) but I told her yes. She was incredibly sweet and is stunning up close.

Finally, I got on Layla’s line. I have always wanted to meet Layla as she’s been one of my favorite Divas for years. After being in line for a while (and doing some shameless site promotion with the people I was around) I got my chance. Again, Layla said she was a big fan of the site and thanked us for all of the work we do. She snapped a photo and gave me a hug as well. Such a beautiful woman.

Axxess is really a great event, but the pricing and organization of it this year we’re out of control. Sure, while you waited in line you could watch some matches of the NXT stars. For me, only Paige‘s match with Summer Rae held my interest, but it was laid out much better in previous years. There’s also lots of displays, including a look at the new NXT Women’s title and some of Trish Stratus‘s attires.

Finally, it was time to head over to the stadium. The stadium is incredible. Lots of different areas to purchase food and beverages and for the most part pretty clean. The arena for WrestleMania 24 was absolutely disgusting.  The others since have been much better. We took our seats and my brothers and I geared up for a great show.

Although a lot of people felt it wasn’t the best ‘Mania, I was pretty impressed. Miz winning the Intercontinental Championship was a great way to begin the show, the six man tag team match was much better than expected, Ryback/ Henry was what it was but at least Henry finally got a ‘Mania win. Fandango and Jericho was one of the best matches of the night, in my opinion. The tag title match could have been a big better but I still enjoyed it (and it was the only Diva moment of the night with AJ at ringside). Punk and Undertaker stole the show. The entrances from both men were breath taking and the match did not disappoint.

Following that match, things took a turn for the worse. Triple H came out looking like someone had finished all over him, which easily provided the unintentionally funniest WrestleMania moment in history. Brock looked hilarious when he saw HHH walking out. Besides that, the match put the crowd to sleep. A lot of the fans began getting up during the match as it just dragged and dragged. It was definitely a let down and I don’t think HHH really needed the win.

Seeing Trish come out for her Hall of Fame segment was a great moment. I’m glad I could be there live to see the celebration for her induction.

Then, Cena’s music hit. I got so confused. Did I miss the mixed tag? No, I’ve been here the whole time. The match was scrapped. For me, that just put a dampener on the main event. As a Divas fan I was really looking forward to the match. The Bella Twins returned specifically for this match and it was cancelled. I already wasn’t too excited for the main event and this made me care even less. It seemed like I wasn’t the only one. Again, the crowd wasn’t too into the main event besides booing John Cena. Cena’s win made the crowd boo even more (except for my brother, the biggest Cena mark ever). Lots of pissed off fans were out leaving the parking lot. 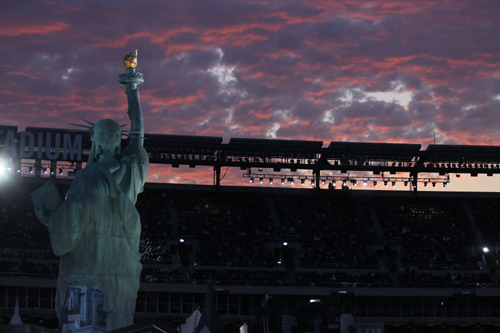 Thanks for coming home to Jersey, WWE.

All pictures © Jake Verterano and Diva Dirt. Do not re-use without authorization.