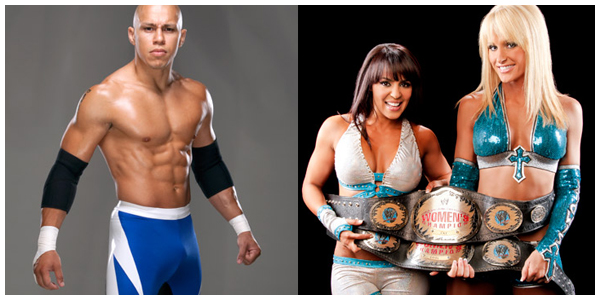 NXT Rookie, Kaval is profiled in the latest edition of ‘The NXT Interview’ on WWE.com. When asked about his relationship with his pros, Lay-Cool, he says:

WWE.com: Switching gears a bit, how is your relationship with your WWE Pros, Layla and Michelle?
KAVAL: Oh, it’s definitely unique. Their personalities are so far over the top. Mine is more reserved and laid back, more low-key. It’s definitely one heck of a contrast. Again, they’re just so over the top. Sometimes it’s a bit too much and I have to take a step back. But I think because of the dynamic of how far apart we are personality-wise, their mentoring and them trying to draw a little more out of me is eventually going to ultimately make me better.

I’m actually looking forward to prolonging this to see where it goes because success is all about growth. If you don’t grow, you’re not going to succeed. So I think with this dynamic between the three of us, it presents a good chance for me to succeed and improve on what I already have as a foundation. So I think it’s going to be good in the long run.

WWE.com: What have they really taught you? Are they helping you come out of your shell more?
KAVAL: I think so. I think what they’ve helped me with is trying not to be so serious! (laughs) I’m so disciplined and I’m so straightforward with my approach on a lot of things, sometimes them being over the top actually breaks my concentration and that actually relaxes me. So it’s a good change from what I’ve been doing before arriving here. Like I said, I think because of the difference between us, I think that’s going to help me grow as a competitor and as an entertainer. Ultimately, it will be more helpful than not.

WWE.com: At first you seemed reluctant to wear the pink shirt they gave you. Now it seems to be bringing you a little bit of luck. You’re No. 1 and you had your first victory. Do you think it’s helping you?
KAVAL: I think it’s too early to determine that, actually. Coincidence? Probably. (laughs) I mean, I’m not wearing the pink shirt when I’m in the ring. So, I don’t know … that actually may be a psychological weapon. Before I arrive in the ring, everyone discredits me as some weirdo wearing a pink shirt, but I don’t know. I still think it’s way too early to determine if it’s actually an effective tool on my performance.

When announced, this pairing did cause a lot of controversy but now well into season two of NXT, I’m finding it thoroughly entertaining. I think both Kaval and Lay-Cool are doing a great job in bringing more attention to other. For Kaval, the unique position of being placed with two Divas and for Lay-Cool, it gives them a little more legitimacy as top stars in the company to be seen as ‘Pros’.