“Ladies of the 80s” Profiled by WWE 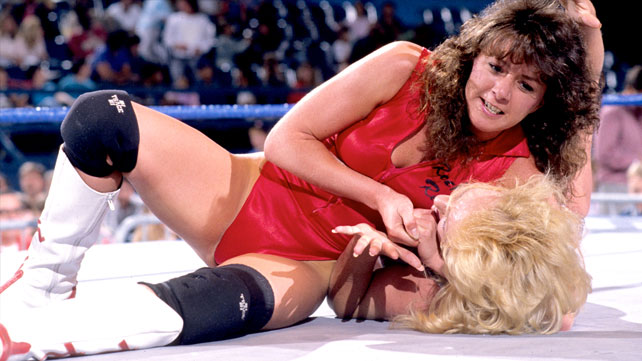 WWE Hall of Famer Howard Finkel has dedicated his latest column to the most influential women in 1980s-era WWE, writing about the likes of the Fabulous Moolah, Wendi Richter, Sherri Martel, Rockin’ Robin and Miss Elizabeth. He also discusses the short-lived Women’s Tag Team Titles and the women who held those belts. Check out some snippets below:

Wendi Richter, and how she differed from Moolah: “In contrast to the crafty and deliberate ways that Moolah operated, Richter was full of vim and vigor. Richter represented a girl who just wanted to have fun, and through her association with singer Cyndi Lauper, they did just that.”

The origin of “Sensational” Sherri: “Having honed her craft in various wrestling organizations in the early-to-mid-80s, Martel entered WWE on July 24, 1987. Untouted, she went right into the frying pan and came out as the new Women’s Champion, defeating The Fabulous Moolah (who had regained the title from Richter under the disguise as Spider Lady). As many thought that her win over Moolah was somewhat sensational in scope, Martel took that adjective to heart and renamed herself Sensational Sherri.”

The Women’s Tag Team Titles: “WWE’s ladies division was so active during the ’80s that there was a Women’s Tag Team Championship. Probably the most recognizable holders of that honor were Judy Martin and Leilani Kai, collectively known as The Glamour Girls.”

The Jumping Bomb Angels: “Now the names of Noriyo Tateno and Itsuki Yamazaki might not ring a bell, but WWE fans might very well remember them as The Jumping Bomb Angels. These two took WWE by storm, and were hot on The Glamour Girls’ trail. This rivalry led to Hamilton, Ontario, Canada, where on Jan. 24, 1988, at the first Royal Rumble event, The Angels ascended to the heights of becoming Women’s Tag Team Champions by defeating The Glamour Girls in a best two-out-of-three falls bout. Many veteran WWE pundits feel that contest was one of the greatest women’s matches ever held in a WWE ring.”

The piece is definitely worth a read, so be sure to check out the full article for yourself.

Who is your favorite “lady of the 80s”? Tell us in the comments!