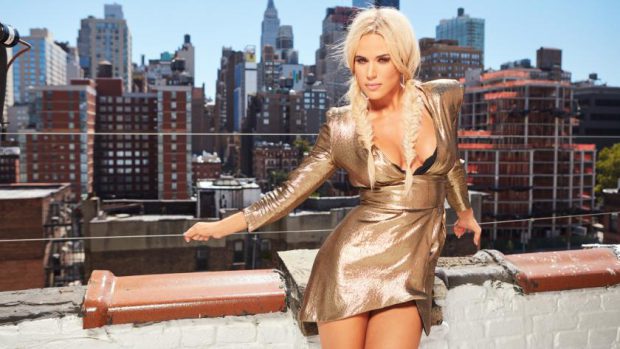 Though she is known for being the “Ravishing Russian” alongside her husband WWE Superstar Rusev, Lana is prepared to show fans a new side of her in the upcoming season of Total Divas.

During an interview with Channel Guide, Lana discusses what fans can expect to see from her in the upcoming season, finding support from fellow Total Divas cast members, her WrestleMania debut match and more.

On what fans can see expect to see outside her WWE persona: “On Total Divas you are going to see the American side of me, and my DNA is American. I grew up in Russia, so there is the discipline and that point-of-view. I appreciate America as the land of opportunity. It’s the land where you can see your dreams come true if you work hard. My parents are American. His parents are Bulgarian. So you are going to see this conflict a lot. When I had the Bulgarian wedding, I almost flew home and left just because there was some serious conflict. It was really hard. Those are the challenges that we have to work through. You will see when you tune into the show.”

On the Bella Twins serving as mentors: “I always go and ask them questions. There are times where I get so stressed out. They can relate because they came from a modeling background as well. They weren’t on the independent scene or come from a wrestling family like Nattie. They’ve helped me with being able to transition from Raw and SmackDown to having the reality show cameras on me. They encourage me to keep practicing and wrestling because the day is going to come that WWE is going to say, ‘You’re wrestling tonight.’ That’s why I’m training because I do want to be an in-ring competitor, but it’s about timing.”

On her WrestleMania debut match: “I would always joke around that my first match will be at WrestleMania. Sure enough that is what happened. That’s where you see me on Total Divas. It’s really exciting. I don’t know how this will impact the Lana character. It’s all entertainment, and we are here to put smiles on people’s faces. I think I’m an example of that. Here I am as a Russian American, but I play a bad guy and speak in a Russian accent. It shows how we are characters and extensions for ourselves. I hope it brings more awareness to the brand and what we actually do.”

You can read Lana’s full interview with Channel Guide here.

Are you looking forward to seeing Lana’s appearance on Total Divas? What are you most excited about this season? Let us know in the comments below!