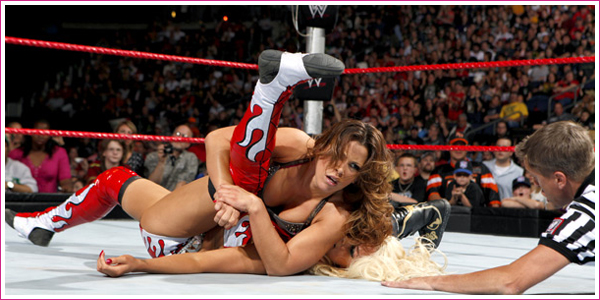 Apologies for the late Raw Redux this week, sick baby at home. I guess you might think that these Reduxes are pretty easy to write and take up 30 minutes of my day, but I really do have to sit down and re-watch the matches a couple of times before I can start analysing. I haven’t had the chance to re-watch Raw after it’s initial airing, until now!

This week on Raw, we saw the logical next step following Mickie James‘ victory over Maryse last week – a tag team match. And tagging along for the ride were Kelly Kelly and Jillian. Mickie continued to be booked strongly against the Divas Champion, pinning her for the second straight week in a row but it was all moot-point, as a match wasn’t announced for Judgment Day as I had expected it might be. With the way this one’s being booked, I think the early title match at Judgment Day would have been perfect, dragging it on any longer won’t work… I mean how many more times is Mickie going to pin Maryse before getting a title shot? I would have had a match announced for Judgment Day and have Maryse retain at the pay per view, as a receipt for the wins Mickie’s clocked up over her and then the following night on Raw you could continue the feud leading to an eventual rematch.

Anyway thoughts on the match… well sorta. We kick off with gasp – a promo? What the deuce as Stewie Griffin would say?! For the first time in what is probably years, a Diva is actually allowed to speak but oh wait – in French. Which means that most of the audience have no idea what Maryse is saying. Kelly kicks off what seems like her first Raw match in ages and looks pretty good. Who knew in 2006, when she was a pathetic glorified stripper she was so athletic? The little sommersault using the ring ropes into an arm-drag was nicely done. But then she just begins to show off, doing a backflip into a pretty shoddy dropkick. Maybe we could tone down the gymnastics and hit the moves properly, Kelly? Kelly then goes for a headscissors takedown which was also nicely executed, like I was talking about in last week’s Superstars Redux, I like that Kelly attempts to bring the fans into her matches. Honestly, I don’t recall seeing any other Diva even bothering to rile up the crowd, so Kelly’s got that working for her I guess.

And from womanhandling Jillian, Kelly isn’t much of a match for Maryse who is just a few years older than her. I think in a few years, Kelly and Maryse will be the company’s top Divas and that could be a pretty good match to see. But right now? The pace of any match can slow down when you’ve got Maryse in there, as she goes for her patented camel clutch before Kelly begins to fight back. Maryse knocks Mickie off the apron and another miscalculated dropkick from Kelly, this time on Maryse.

Mickie tags in for the first time in the match and it’s all over for Maryse from this point. Mickie does her regular 1-2-punch shtick and eventually Jillian and Kelly get involved too. Maryse seemingly has the upperhands in the battle of the DDTs, but nope for the first time (I think) a Diva manages to counter Maryse’s DDT as Mickie hits one of her own for the win again.

Overall not a bad little match but I fail to see where they can go next with this unless they award Mickie a title shot. I’m sure they’ll do something really stupid like having a Divas Championship match next week on Raw when you could’ve had it on the pay per view that’s the night before.

So with that constituing the ‘solid effort’ part of Raw, later we got the ‘not-so-solid effort’. Santina is now a lesbian folks! Lesbian Santina, having already made out with Rosa Mendes, had a match with Beth Phoenix where once again, the Glamazon jobbed out. Honestly, it doesn’t even bear reviewing but I have to wonder where else they can go with this incessant storyline? Santina has gotten Beth’s number far too many times for a payoff of Beth unmasking Santina and winning a match against ‘her’, pointless.