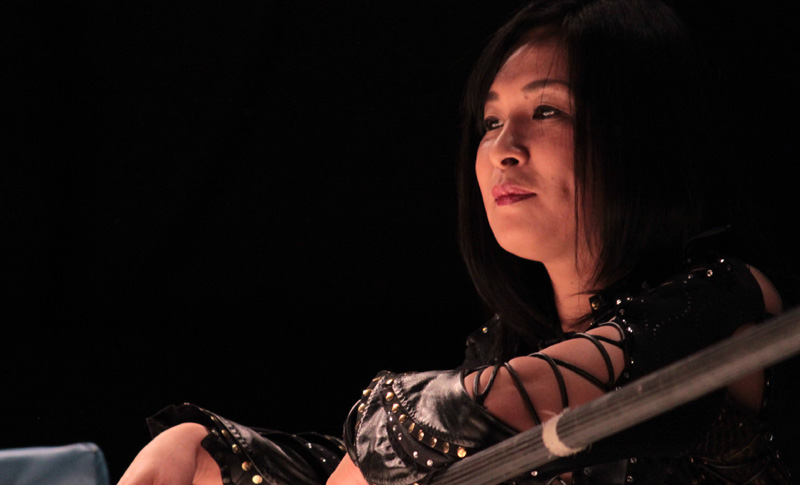 Diva Dirt welcomes guest contributor Leslie from our partner site, Dirty Dirty Sheets, who will be bringing us a series of articles looking at the incredible career of Manami Toyota, the 2011 Diva Dirt Legacy Award recipient.

Manami Toyota is the greatest professional wrestler of all time. From her endless list of epic matches, to her storied rivalries with other all-time greats, to her unique and innovative style, to her regality both in and out of the ring, to her influence on wrestlers of both genders across the world, Manami has spent the past 22 years of her life giving wrestling fans the most amazing career they will ever have a chance to see. There is no question that she is a deserving recipient of the Diva Dirt Legacy award. In fact, her acceptance of it elevates the award itself. We at Dirty Dirty Sheets are honored that Diva Dirt has asked us to participate in this great moment. This is the first of a series of articles we will be posting here about Toyota and her career, leading up to the Diva Dirt Legacy Award presentation at CHIKARA’s JoshiMania event in December.

The Legacy Award is one of many accolades Toyota has received throughout her career. She has held the top title in multiple major promotions including JWP, GAEA, and Oz Academy. Of course, she is most known for her run in the legendary All Japan Women’s Pro Wrestling. From the late 80’s to mid 90’s AJW was the foremost women’s wrestling promotion in the world, and Toyota regularly found herself at the top of it. She won numerous titles and tournaments as both a singles and tag team competitor. AJW was the home of WWWA title, the most prestigious title in women’s wrestling history, which Toyota won a record four times. Toyota’s high level of wrestling has received recognition from fans and journalists worldwide. The Wrestling Observer Newsletter has rated ten of her matches “five star”-worthy, with two of those matches being named Match of the Year. In 1995, Toyota was named WON Outstanding Wrestler of the Year, beating out all other male and female wrestlers.

With her death-defying dives, innovative maneuvers, and classically beautiful appearance, it is no wonder that Toyota has developed a following across the world. Matches like this classic 1994 bout, with good friend and constant rival Aja Kong, have introduced hundreds of thousands of people to the unique style of Joshi Puroresu:

Before becoming the wrestling Queen we now know, Toyota was just shy teenage girl with a passion for wrestling. She became a fan after watching some wrestling videos and discovering the Red Typhoons. Desiring to do something different from the norm, and deciding that she possessed no other talents, Toyota chose to audition for AJW. At the time, there were thousands of young girls who wanted the glamorous life of a Joshi star. Only a few were allowed to pass the audition process, and those that did were put through a brutal and rigorous training process, which drove the majority to quit. Toyota was never deterred from her dream. It wasn’t long before the quiet school girl turned into a breakout Joshi wrestler. She gained early recognition as part of the “Tokyo Sweethearts” tag team with Mima Shimoda. Here is one of their matches, where they take on the Dream Orca team of Toshiyo Yamada and Etsuko Mita in a match where these relative newcomers stole the show:

Toyota showed signs of greatness very early in her career. This was by necessity as the level of competition she was surrounded by was unmatched: Bull Nakano, Akira Hokuto, Kyoko Inoue, Aja Kong, Toshiyo Yamada, Mayumi Ozaki, Dynamite Kansai. Joshi in the ’90s held a plethora of top level talent. Not even famed men’s promotions like New Japan and All Japan had rosters as deep or put on shows at as consistent a level of quality. Toyota could have easily been lost in the shuffle of all those great wrestlers and great matches.

Never was there a more fiercely competitive locker room than AJW in the 80’s and 90’s and they all had to compete as a group against promotions like JWP and LLPW. Joshi Puroresu was at its height in both mainstream popularity and artistic quality but, in the end, it was Toyota who rose above the hundreds of other tremendously talented women.

As she told me during one of her US visits, Toyota was driven to have the best match on every single show. She even refused to watch other wrestlers because she wanted to create her own unique style. Toyota’s struggle and triumph is no more evident than in the below match where she is forced to face the entire AJW roster, gauntlet style. An amazing feat, one that probably no other wrestler could take on.

As one of the top stars of a promotion like AJW, Toyota’s influence would be impossible to overstate. Her appearance, wrestling style and demeanor are constantly emulated by aspiring stars. She created numerous moves including the Japanese Ocean Cyclone Suplex, Toyota Roll, and Queen Bee Bomb. Seemingly every female wrestler from Natalya Neidhart to Gail Kim to Rain to Sara Del Rey name Toyota as an inspiration. Even male competitors like NJPW’s Shinsuke Nakamura and MVP proudly call themselves fans of her work.

Toyota’s recognition has gone far past the respect of her fans and peers. In mainstream Japanese culture, she is considered the representative of Joshi Puroresu. Toyota has appeared in manga, anime, and numerous TV programs. When Fuji TV, broadcaster of AJW, ran their yearly women’s wrestling special, Toyota was the only wrestler that was always included in the main event. When Japanese game developer AKI produced WCW/NWO World Tour video game, Toyota was the only female they chose to include. Here’s a clip of Toyota’s cameo in the Ayane’s High Kick anime:

Despite all this international admiration, it was not until 2010 that Toyota had the opportunity to perform in the United States. CHIKARA, a promotion formerly known for its comedic lucha-libre influenced stylings, dove headfirst into Joshi by bringing in its most recognizable figure for two northeast events. Toyota headlined a sold out show in Brooklyn, New York where she and Mike Quackenbush took on Sara Del Rey and Claudio Castagnoli. The match itself was outstanding, but the atmosphere surrounding Toyota was indescribable. Even though many of the fans had probably never seen one of her matches before, everyone knew that they were in the presence of greatness. Afterwards, Toyota said that the love of the fans and talent of the CHIKARA locker room had reinvigorated her passion for wrestling. Toyota returned to the United States earlier this year for CHIKARA King of Trios. Here’s one of her three matches from that weekend, as she teamed with Mike Quackenbush and Jigsaw to face the SAT.

Even after the closing of several once great Joshi promotions, even after many of her colleagues (some many years younger than her), have retired, even after 22 years of top rope dives and piledrivers, Manami Toyota remains. As elegant as ever, Toyota continues to proudly represent the history of Joshi Puroresu for yet another generation. Manami Toyota defines what it means to be a female pro wrestler, as well as what it means to create a legacy in wrestling. It is only fitting that Diva Dirt, the world’s top female wrestling website, present her with the Legacy Award. 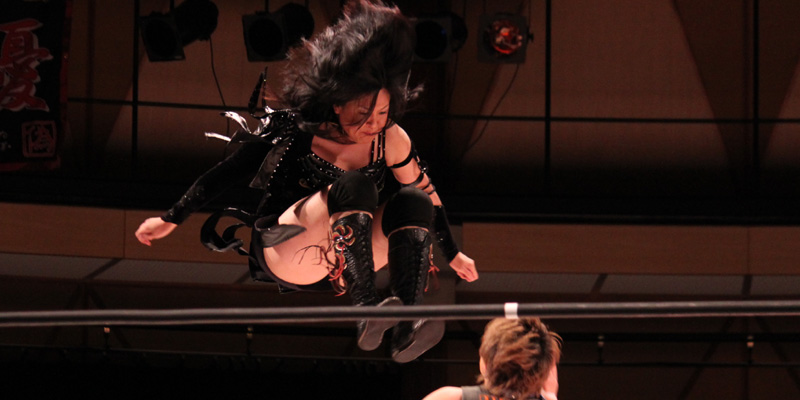 We at Dirty Dirty Sheets could not be prouder to do our part to join Diva Dirt in this celebration of Toyota’s career. In future articles we will discuss in depth some of her greatest matches and rivalries, as well as look back through our archives of images and articles on Toyota, and talk more on the influence her wrestling has had on today’s wrestling. Until next time!

Got a favorite Toyota match or moment? Tell us in the comments…