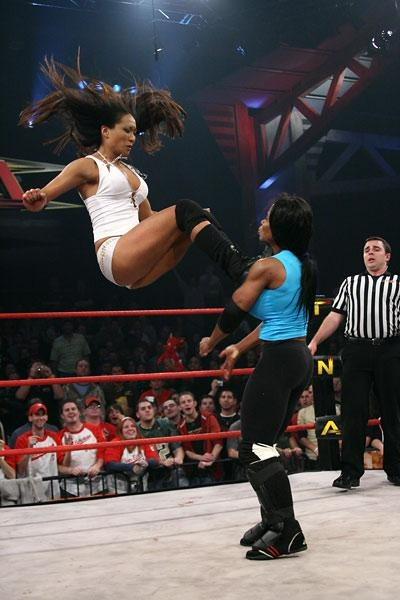 To kick off the celebrations, we are honored to welcome former TNA Knockouts Champion and current Impact Wrestling star, Gail Kim, who has contributed a guest blog paying tribute to one of her toughest opponents, Jackie Moore.

First off, I want to say that it’s an honor for me to be asked to write about your Legacy Award winner, and that’s because of its recipient. Whether you know her as Jackie, Jacqueline, Ms. Texas, or one of her many other names, one thing we all know about her is that she is one tough woman. I was fortunate enough to get to work with Jackie twice in my career, once in WWE and the most recent time in TNA Impact Wrestling. I didn’t get to know her much the first time because we didn’t work that often together and Jackie was always nice but quiet. All I remember was facing her in the ring the first time on Sunday Night Heat and I just remember thinking, “Damn! I’m getting my ass kicked!” Lucky for me, I like to be physical in the ring or else I would probably be crying like a baby somewhere.

Fortunately we had the opportunity to work again together in TNA and I’m so glad, because I got to know Jackie a lot better on a more personal level. She’s quiet but she’s funny as hell and is a great, genuine person. I remember when she first came to TNA and there was a little pressure because it was pre-women’s division and I felt like it was a test to see how it could go. I just remember the catfights. Wow, people thought it was real. She always brought it and I loved it. We had a great chemistry. I hold the highest regard to her, in the ring and out. Her professionalism and talent speaks for itself. I believe that was the turning point for the women’s division. Things only grew from there.

To say you have made professional wrestling as your career for 20 plus years, as a woman, that is incredible. It’s a true testament to your passion and talent in this business. She has always looked incredible and has always been and will always be the toughest female I have been in the ring with. That’s pretty crazy to say since I’ve been in the ring with some VERY tough girls who have been bigger than her but it’s absolutely true. Who else gets their teeth knocked out in a street fight and goes to the back, asks for sugarless gum to stick in her two front teeth gap and goes straight back out? That’s Jackie! So thank you to Jackie who is so deserving of this award for everything you have done for me, women and the business. You deserve all the happiness and success in the world.