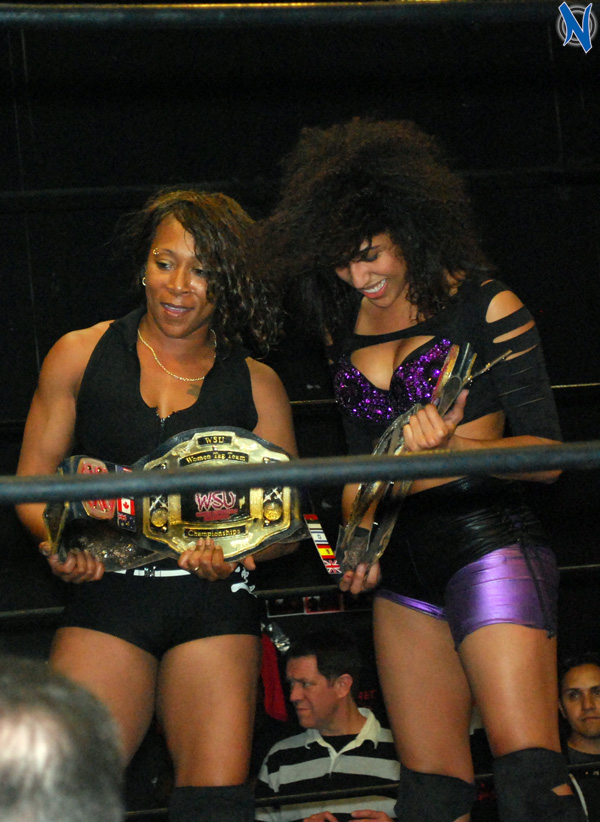 I moved to New York from the Dominican Republic for good when I was 7 years old. I don’t remember much about my childhood. The one thing that I do remember is how much I loved wrestling, how easy it was to get lost in that world, even when I didn’t understand a word that was being said. Maybe the language difference is what keeps me from remembering exact story lines, but the faces and the people I admired always stay in my mind. One of the faces I recall vividly is being honored this year with Diva Dirt’s Legacy Award. I remember watching her on TV, she was working for WWF back then, and just thinking, “Holy cow this woman is tough!” Anything the men could do, she could do better. There was an air to her that said she meant business, that if you were going to step up to her, you were going to have a fight on your hands. In essence, she wanted you to know that she was “the baddest bitch.”

As I got involved with sports in high school, my focus on wrestling shifted. I was more concerned with keeping up with my grades to be able to continue playing sports. Fast forward a few years and after college, I found myself once again immersed into the world of professional wrestling, this time on the other side of the guard rail. After only training for six months, I started working for Women Superstars Uncensored (WSU) at their 3rd year anniversary show. To add to my nervousness, I saw the card and it was stacked! On it were women that I had grown up admiring and new wrestlers that had made a name for themselves in the past few years. When the show arrived, I was completely blown away by how down to earth and sweet these ladies were, there was no ego about them, no sense of entitlement, just pure love for the sport. Being in a locker room like that just makes you want to be a better wrestler, makes you want to work harder.

Eight months into being at WSU, Tina San Antonio and I became WSU Tag Team Champions and were set to defend them at the 4th year Anniversary Show in an ‘Uncensored Rules’ match (watch). It seemed like we had come full circle, but due to controversial circumstances, I was left with no partner and titles that HAD to be defended or I’d be stripped. Walking out to the ring with no one by my side was hard, but when her music hit and she stepped through the curtains and told me she’d be “honored” to be my partner, I wanted to cry. That match was definitely one of the toughest things I’ve had to endure in my life, not just in wrestling. It was brutal to say the least but, as we had Amy Lee tied down and I looked up and saw her finish Cindy Rogers, I could not be happier. I ran into the ring and hugged her and hard as I could and she whispered into my ear, “Thank you.” I couldn’t believe that SHE was thanking ME!! At that moment, I felt no pain, nothing was more important than that moment. We kept going back and forth thanking each other, hugging on the ground until her music hit and we did what felt natural; we stood, embraced again and danced our way to the back.

As we took our pictures with our new titles, she confessed that at first, she didn’t even know me as Marti Belle as she had always called me her Spice Girl, a name she said to me every time she saw me, in reference to my hair. The only thing I regret was not being able to work more with her; there was so much I knew I could learn from her, from just standing on the apron waiting for a tag to watching her conduct herself in the locker room, to how she interacted with her fans. She is an amazing human being, kind, compassionate, tough and a hell of a woman. She is a wife, a mother to beautiful twin girls and a professional wrestler. She is a woman I admire, a deserving woman, she is Jazz.