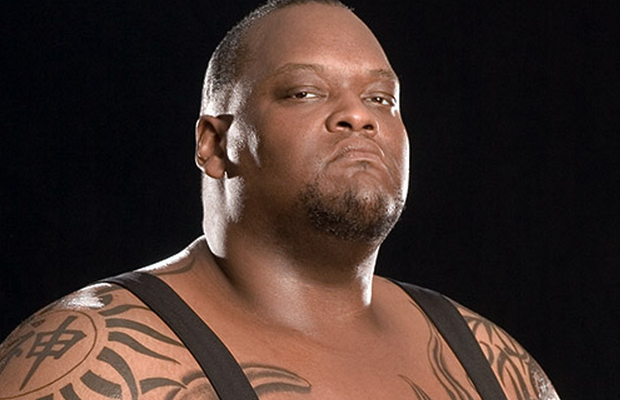 Lilian Garcia and Trish Stratus are two of the many women of wrestling who have paid tribute to Nelson Frazier Jr., who has died aged 43.

Frazier, who appeared in WWE under the names Mabel, Viscera and Big Daddy V, passed away yesterday following a heart attack.

Whilst in his third WWE stint (as Viscera), Frazier was a part of a gimmick change into his “World’s Largest Love Machine” character, which saw him become romantically involved with WWE ring announcer Lilian Garcia.

Speaking fondly of the time she shared with Frazier, Lilian tweeted:

Saddened 2 hear news that Nelson Frazier aka Viscera passed away yest. I will always cherish our time working together. Grt Man! #RIP

Another Diva who aligned with Viscera on screen was Trish Stratus. After her heel persona used Viscera to do her dirty work, Viscera got the last laugh, flattening Trish with a big splash and transforming into the love machine. Trish tweeted thoughts on her loss and said:

Sad to hear the news about my friend Nelson. He was a talented, funny teddy bear w/ a big heart-thankful 4 the time I had to get to know him

Other women who paid tribute to Frazier include former Intercontinental Champion Chyna, NXT Women’s Champion Paige and five-time Knockouts Champion Tara. See their tributes and condolences from others below.

So sad to hear about Viscera…..he was SUCH a nice man #RIP

I just heard that Nelson Frazier Jr. better known as Viscera or Big Daddy V has passed away. I'm so shocked and saddened by this.

RIP VISCERA. My condolences to his family and sending prayers their way

Rip Visceras! I grew up watching men on a mission! God blesss!!! May all prayers and positivity be with you!

No no no!! RIP Nelson Frazier… :( I'm extremely upset if this is true… We traveled together in All Japan Wrestling.. Such a great guy!!

The biggest heart in the business. RIP My Friend http://t.co/pB99LN4N00

All here at Diva Dirt send our condolences to the family of Nelson Frazier Jr.

What was your favorite Diva-related Viscera moment?