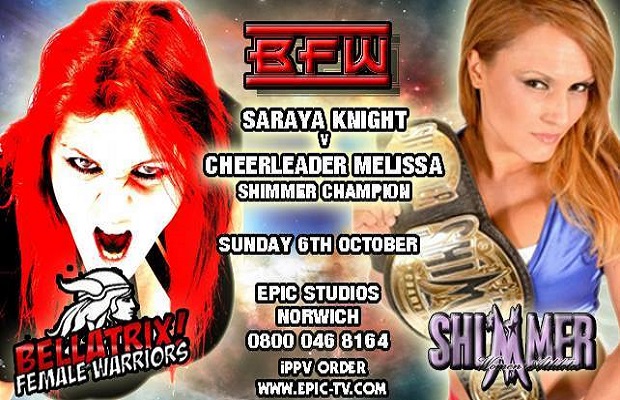 Three championship matches take place tonight tonight, as Liberty defends her RQW European Championship against Sammi Baynz, Erin Angel puts her Bellatrix British Championship on the line against Penelope and Mercedes Martinez makes her UK debut, defending her NCW Femmes Fatales International Championship against Norway’s Miss Mina. Also on the card is SHIMMER Champion Cheerleader Melissa, who faces Saraya Knight one more time in what will be the deciding match of their violent and embittered six-year transatlantic feud.

Bellatrix 7 comes to us live from Epic Studios in Norwich, England, starting at 6:30pm GMT (1:30pm ET). Click here to order the show.

Live results of the show below:

Christina Von Eerie defeated Skarlett with a backstabber. A great, calculated match, starting off with excellent ground-based action in the first ten minutes before exploding into life in the latter stages. The pair brawl post-match, requiring all the referees to come out and break them up.

Destiny defeated LuFisto with the 747 Splash. A solid, aggressive slugfest peppered with a few points of comic relief. Good match.

Erin Angel defeated Penelope by two falls to nil to retain the Bellatrix British Championship. The match was fought under British rules (two falls, 10 three-minute rounds). Angel dominated the match early on, picking up the first fall in the second round with a hurricanrana. Penelope started to pick up steam in the third round, landing a nice suicide dive to the outside, but Erin was too much and got the second fall later that round with a reverse rana from the second rope.

Mercedes Martinez defeated Miss Mina with the Fisherman Buster to retain the NCW Femmes Fatales Championship.. Another great, hard-hitting match with plenty of strike exchanges. Mina really took it to a new level for this match, while Martinez had a fine outing on her UK debut.

Saraya Knight and Cheerleader Melissa wrestled to a 20-minute time limit draw. The match, despite under normal rules, was every bit as brutal and violent as you’d expect, with the finish happening as Melissa had Saraya locked in a lethal leg submission for over a minute. Saraya did not give way, and the pair embraced in the ring after the match, having finally gained each other’s respect. Fantastic match.

Sammi Baynz defeated Liberty to become the new RQW European Champion thanks to interference from Courtney Rush. Despite both wrestlers’ relative inexperience they put on a worthy, back-and-forth main event. The finish came when, as the referee was unconscious, Courtney Rush entered the ring supposedly to make the count for Liberty, but instead socking her in the face and dragging Baynz onto her for the pinfall. After the match, Axl Lynch (nope, no idea either) came out and revealed himself to be the master behind this plan.

That’s it for our live coverage of Bellatrix 7. Check back tomorrow for a full review!