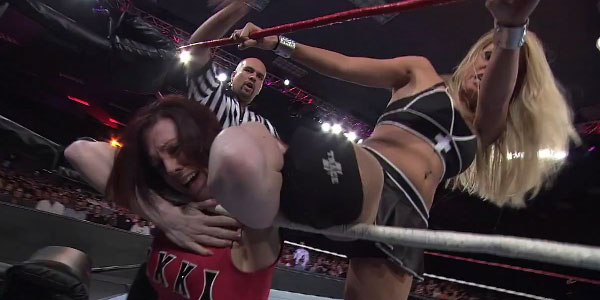 < Welcome one and all to another exciting edition of the recently debuted, Lucha Libre USA Watch. Last time we met, we witnessed an interesting six Chica tag featuring some of the most well known female wrestlers in the world today! Tonight, however, we remove four of those women and prepare for a singles bout featuring Nurse Krissy Sealice (Kristin Astara) facing off against Nikki Corleone (Nikki Roxx/Roxxi). Can Krissy prescribe a loss to Nikki? Or will Corleone represent her family name with honor and emerge victorious? Let us find out!

As we head out to the ring, our coveted announcer, Leticia Castro, proclaims the following contest to be scheduled for one fall as she then welcomes Nurse Krissy Sealice out to the ring. Krissy steps out from the back and taunts the fans a little, before stepping into the ring and awaiting her opponent, Nikki Corleone… and wait a second! Is that Steve Richards on commentary?! Okay, putting my personal excitement aside, out comes Nikki Corleone, with her brother Marco (Former WWE star, Mark Jindrak). He helps her into the ring and cheers her on as she prepares for singles action.

The bell sounds as the two circle around the ring. They go to lock up, but Sealice kicks Corleone in the abdomen and hits a few forearms to the back. Kristin backs Nikki into the ropes and goes for an Irish Whip, but Corleone reverses and executes a nice drop toe hold to send Nurse Krissy down in pain. A hip toss up next, followed by a dropkick! Krissy runs forward once more but gets dropped with a bodyslam for a one count. Sealice backs herself into the corner and manages to rake the eyes of her opponent when the referee’s vision is out of focus.

She ambushes Nikki from behind and continues the beat down on Corleone. Krissy shoves Nikki into the second rope and uses her leg to apply a nasty choke hold until the referee’s count begins. She shoves Corleone’s head into the turnbuckle, and then reverts back into the leg choke to add the pain. Krissy picks Nikki up and drops her with a bodyslam for a one count, as Nikki gets the shoulder up. Sealice begins to roll Nikki’s head into the canvas, before dropping an elbow to the back and just destroying poor Nikki. She then picks Corleone up and drills her with a backbreaker to the knee, before applying a submission hold to stretch the arms out.

The crowd begins to get behind Nikki, as she is able to fight out. She goes for a bodyslam, but doesn’t have enough strength, as Krissy lands on her feet and shoves Nikki down for a two count. Krissy goes for a suplex, but Nikki blocks it and executes one of her own, as both women are now down and a count begins. They start to muster some energy, as it’s basically a fight to your feet. “Let’s Go Nikki” chant begins, but Krissy takes control at the start. She goes for a few punches, but Corleone blocks them all and nails some jabs of her own.

Clotheslines follow up, before she sends Sealice into the turnbuckle. Nikki charges forward, but is met with a stiff elbow to the jaw. Krissy walks up to Nikki, but Corleone drops her with a fallaway slam for a very close two count. Nikki picks her back up, only Krissy connects with a jawbreaker and runs off the ropes. Sadly for her though, she gets caught in a spinebuster position, as Nikki then drops her with the Chica Buster for the victory! Nikki celebrates her big win, as her brother seems to have disappeared during the match.

Thoughts: A solid outing from these two Chicas. I’m starting to enjoy the division in Lucha Libre USA a lot, and I can’t wait to see more matches. I thought the finish was great because I’ve never seen someone get set up in the Barbie Crusher/Chica Buster like that, rather Nikki would always just lift them up on her own. I do wonder what happened to Marco though? He walked out all the way to the ring, and I believe he was standing there when the match started. Maybe he didn’t want to be a possible distraction to Nikki? Or perhaps he was too intimidated by both she and Krissy’s greatness? I’ll choose to believe the latter. And oh yeah…Stevie Richards! That is all.